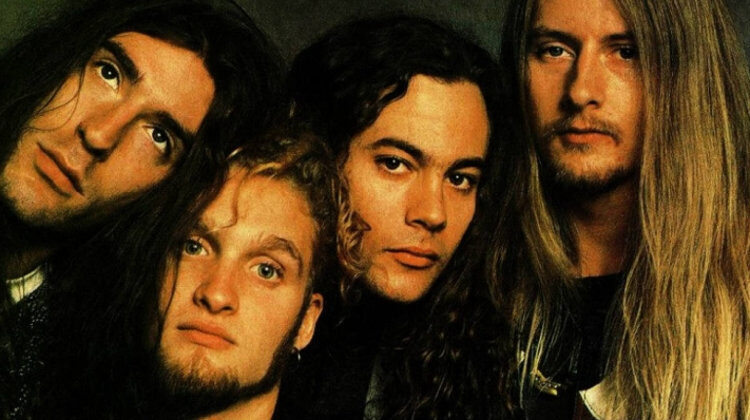 On the 30th anniversary of its release, Matthew Wand revisits Alice in Chains’ debut album, Facelift, telling the story of how it came into being.

The Oxford dictionary defines grunge as “US slang; a general term of disparagement for someone or something that is repugnant or odious, unpleasant, or dull.“

The irony in this definition is that grunge music or the Seattle sound is far from any of these descriptive words and it still remains a very popular genre of music. Many articles and column inches have been written about the grunge scene and you could fill pages of A4 listing all the grunge and grunge associated bands, arguing till the cows came home about who were the first or definitive grunge band.

What is the ultimate truth is that Alice in Chains with Facelift was the first band to have a commercially successful grunge album on a major label. Soundgarden released Louder than Love the prior year and although critically admired, did not sell well until after the grunge explosion.

Alice in Chains formed in 1987, founded by Guitarist Jerry Cantrell and drummer Sean Kinney. Four stringer Mike Starr was added as bassist soon after and then Jerry talked his housemate Layne Staley into quitting his band and joining the three musicians to complete the line-up. The band played under several names at their early gigs before deciding on Alice in Chains, which was the name of Staley’s old glam metal band Alice N’ Chains.

The Seattle band recorded a demo in 1988, which fell into the hands of major label A&R, via the Soundgarden management team. One ‘big cheese’ meeting later and the band were signed. After inking the major label deal with Columbia Records, Alice in Chains entered the studio in December ‘89 to record their first album.  The session spanned several months, in both Seattle and Hollywood, through to April 1990 and was captured by Jane’s addiction producer Dave Jerden.

On 21 August 1990 Facelift was released to the masses. In a short space of time, Alice in Chains debut album had become the focal point for the record label and for good reason. The Promo EP release of We Die Young the previous month had been a surprise success with alternative radio, not so much Metal stations though, not at first. This led to Columbia pulling the LP release forward to strike while the iron was hot and We Die Young is where the record starts.

It is a strong start to the twelve-track LP, opening with the successful single. A tune inspired when Cantrell witnessed pre-teens dealing drugs near his home, noting they may all die young. The next three tracks were all released as singles. Bleed the Freak, Sea of Sorrow. and the MTV popular Man in the Box. The sleeper tracks on the album being the slow-driven and heart-wrenching Love/Hate/Love and the nailed-on gig opener It ain’t like that.

The musicianship by Alice in Chains is immaculate. A lot will always be said of Staley/ Cantrell – songwriting, riff composing, and vocal arrangements. What is not focussed on is the backbone of the band. Mike Starr on bass fulfills his duties in the rhythm section perfectly but also fills the gaps left in a one guitar band. As for Sean Kinney, he broke his hand just prior to the recording of Facelift and had to stand on the sidelines and watch his bandmates try to play with another drummer. Frustrated, Kinney broke off the cast and played with a painfully broken hand, submerging it in a bucket of ice in between takes.

One aspect that’s infamous about Facelift is the cover artwork. The band had a concept for the album name and cover. They wanted an image that depicted a birth of some kind, out of an eyeball. The band managed to squeeze a three-day photoshoot out of a one-day budget, as the photographer liked them. The guy behind the lens shot several ideas, including the cover of the We Die Young EP. But it was not until he started messing around with individual headshots of the members, using a multiple exposure technique (no photoshop) that the concept came together. When the band saw the results of these headshots, the name Facelift was born. The band picked a disturbing shot of Bassist Mike Starr to grace the cover.

Nirvana may have changed music forever, but it was Alice In Chains that set heads turning and hearts racing. As mentioned earlier, the Alternative radio stations picked up on Alice in Chains early. Yet the traditional metal stations refused to play their singles. Why? Because they did not like Layne Staley’s vocal style or the lyrics he sang. Presumably, he was not screaming and screeching about ancient dragons or castles in the sky. They soon changed their tune, literally, once Chains started shifting units. Which is a little hypocritical and corporate, in my opinion.

Facelift is very much the sound of a band still finding their feet and defining their own sound. Their songwriting would soon be refined on subsequent releases, especially on the next full release Dirt. With this debut album, the band still lean on their metal upbringing mixed with the heavy riff, emotional lyrical content, and the best vocal harmonies in the industry with Staley and Cantrell. All these aspects Alice in Chains will become acclaimed for.

On the eve of the releases of Ten by Pearl Jam and Nevermind by Nirvana, Facelift was officially certified as Gold in the U.S. (500,000 copies sold) on 11 September 1991; the first grunge album to do so and went on to become double platinum.

The LP was pressed to vinyl in 1990, but as wax was a declining media, there were never multiple runs. It has been over 30 years and has never been officially reissued on vinyl record, until now. As part of a social media 30 days of Facelift in August and September 2020, Alice in Chains announced that Facelift will be released again in a 30th Anniversary deluxe box set as well as a 2-disc version. It seems that needles will be dropping on the record again very soon.

‘Facelift’ will be released and available on vinyl from 13th November 2020. You can pre-order from various online stores and record shops.