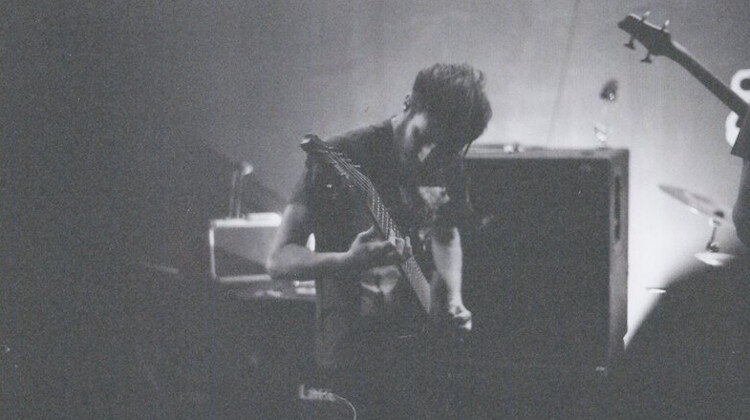 Abiura creates a mesmerising look at modernity and the hard journeys we all face in the future on the dark ambient record, Hauntology.

Italian dark ambient artist Abiura – aka Daniele Vergine – has a skill at building emotional layers into his music that others would struggle with. His music is littered with deep and foreboding themes that come across through instrumental pieces in intriguing, and sometimes distressing, ways. New album Hauntology is actually a 31-minute continuous piece that is split into 6 different sections, delving into themes of lost futures, cultural dead ends, harsh realities and a future that is grim.

The concept album begins with an ever-growing drone of synth, guitar-infused sounds that help build a dark and menacing atmosphere tied together with low bass. It takes its time to build, and when backed up by the themes of cultural impasses and a future that is slowly fading away, you really do get a sense of the raw and emotional plight the world is going through.

Vergine has a deft skill at knowing when to introduce a new sound or section, and when the piece hits the 8-minute mark, distant, echo-laden vocals and warm yet sporadic piano give off just enough humility and serenity to change the sound entirely. It’s a clever way to move the music onwards and shows the artist’s skill in production.

As with much ambient music, you have to be in the right frame of mind to listen, especially when the music is so dystopian and thought-provoking like Hauntology. As the 30-minute piece rolls onwards, it starts to get more intense as destructive, distorted sounds are suddenly added into the mix as if the world is caving in and there’s nothing we can do to save it. Here, it has an almost cinematic quality about it before static starts ebbing and we’re once again invited to follow the constant drone forwards against more ethereal output.

What is truly interesting about the piece is how you get lost in time when listening. You don’t realise where you are as the half-hour plays out, and I believe that was the reason for Vergine wanting to release it as a 30-minute piece instead of 6 separate tracks. The way it rolls seamlessly yet subtly changes creates an atmosphere for the listener to get lost in and develop their own opinions about the heavy topics put forward.

As you work your way to the album’s conclusion synths become more sporadic and guitar-based sounds jump out at you even more as bass drums create an almost doom metal outro. It caps off what Vergine sees as the world slowly caving in on itself, and perhaps there is not much we can do about it anymore.

Hauntology by Abiura is dark ambience at its heaviest. The way it develops themes and slowly adds layers and ideas seamlessly is mesmerising with the production techniques used in subtle yet powerful ways. You have to be in the right frame of mind to listen and be able to just sit back and lose yourself in the music, but if you can, you will be treated to an intense journey.