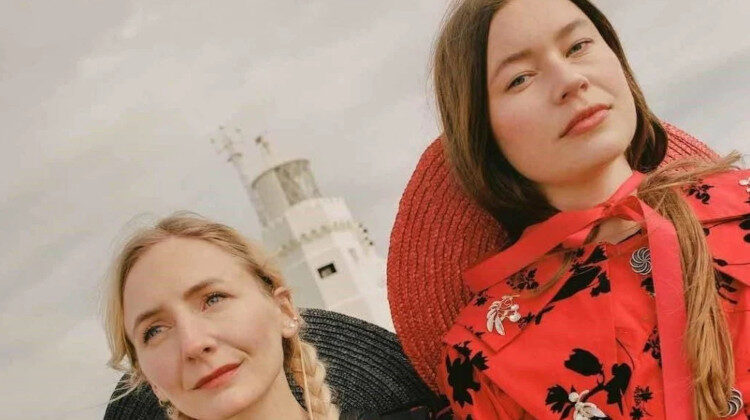 Reputations. Reputations can be made or broken on one song. Just a single song can launch a band from relative obscurity into mainstream infamy.

It’s a tale as old as music itself: One tune, one melody, one hook, and one stroke of genius causes a groundswell that catapults an artist on a trajectory to superstardom. For Wet Leg it was Chaise Longue.  Now, with the release of their self-titled debut album, they’ve come to show the world they are more than just one song.

Hailing from the Isle of Wight, Wet Leg is an indie duo consisting of the twin guitars and shared vocals of Rhian Teasdale and Hester Chambers. Formed in 2019, it didn’t take long for the old college friends to ink a record deal with the label, Domino. Fast forward to June of 2021, they released their first single which snowballed into heavy radio airplay rotation, high profile TV appearances and subsequent releases all to critical acclaim. All this was quickly followed up by the inevitable announcement of their debut LP.

Wet Leg starts with Being in love and is a pulsating opener. It’s an uplifting love ditty lasting a little over 2 minutes but says all it needs to set the scene and let the listener know what to expect from the next 11 tracks.

Then comes the song that sparked it all off. Chaise Longue was the duo’s debut single and the track they are most recognised for thus far. It’s a great indie groove with a fantastic spoken vocal melody, where the pair trade vocal chops. Echoing this is the twin guitars, that manage to harmonise yet trade-off just like the vocals. Any song with lyrics creatively mentioning “BIG D’s” and “buttered muffins” is a winner in my book; shades of Bill Paxton’s Chet in Weird Science right there. Chaise Lounge is 196 seconds of pure joy.

Wet Dream comes in at song number four on the LP and is the jewel in the crown of the whole album. The follow-up single to Chaise longue proved six months ago that Wet Leg had more than one great song under their belts. The track has a great flow and a killer melody, which is a concurrent theme throughout the whole album.

Towards the end comes Piece of Shit, an acoustic jam that has a great feel. It swings like a 90’s indie tune and the band feel more locked in than anywhere else on the album. For me, Wet Leg, ooze with 90’s alternative rock influence. Bands with a strong female presence come to mind such as Verruca Salt, The Breeders, Hole and L7 to name a few. I would be very surprised if the duo didn’t grow up listening to and drawing inspiration from those types of bands.

Each track beautifully drifts from one to the other but there is enough variation to not feel like you’re listening to one continuous sound. Teasdale/Chambers each own their own vibe and this could be viewed as slightly formulaic, but what new band isn’t viewed like that in their first outing? A self-titled debut album is a great platform for growth.

Wet Leg is as fresh as a dewy spring morning and as lively as a box of jumping frogs. The song construction and arrangement are on point, it’s punchy, catchy and energising. The duo have captured the essence of ‘fun song writers’; a little familiar at times but staying true to the stories they are conveying. The LP is a tale of the pressures of modern life told through the eyes of the two members, while their tongues are placed firmly in their cheeks. This is RiotGrrrl for the 21st century and a representation of the Loud Women movement. Not since the debut of the Arctic Monkeys has indie rock sounded so raw and honest.