It’s been a long wait for the new TOOL album, with a period of uncertainty, frustration and longing for fans and music lovers alike. Is Fear Inoculum a masterpiece worth waiting for?

Since TOOL released their last album the earth has rotated around the sun thirteen times. 2006 feels like a lifetime ago. So much has changed. As a person consumed by music, I have seen what has been written about waiting for a new album from the L.A. groove metal band. Listening to the album, I quickly discovered that the world has turned, the music industry mutated, but thankfully TOOL has not.

From the opening, the title track Fear Inoculum pulls you away from all that is your life and submerges you in the sonic world the band are recognised for creating.  TOOL are four instruments, each playing their integral part in painting you a picture of the piece of music you are listening to. 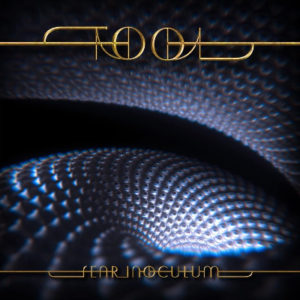 The trebly heavy chorus bass tone that Justin Chancellor has carved out over the years is present as ever, but he also holds down the low end and locks in with the drums of Danny Carey beautifully. The guitar work from Adam Jones is impeccable and virtuoso. Jones has this gift of just doing enough to evoke the desired emotion from the listener. Which brings us to Maynard James Keenan.

The lyrical and vocal work on this album is that of unmistakable understatement. Maynard’s voice is not the centrepiece of the biggest jewel in the TOOL crown, but a cog in the wheel of the machine; an instrument adding its melody to each composition.

The album rages on like a juggernaut through each track, slowing briefly in those times of dynamic switches only to fire up again and continue its rampage. The groove and alternative timing that TOOL possess keeps the momentum of the album goin., It’s not a cliché head bobbing or toe-tapping experience, but you feel the sway of the music and it moves you. There is no ‘must listen to’ track, no chart threatening lead single. Fear Inoculum is 87 minutes of the whole TOOL experience. The album was definitely worth the wait. If we have to wait another thirteen years, so be it.

Uncompromising, uncomfortable, unapologetic and unparalleled. TOOL have delivered on their promise. They’ve never been a group to serve up pretty little ditty pop songs to shift units, they create music as a form of art. They conjure up emotion and imagination like no other band in living memory. There is no anthem-like choruses here or melody hooks that you sing along to. TOOL is the hook. They are not the soundtrack to your life, but they are the musical embodiment of your very being. TOOL is a piece of your soul you didn’t realise was missing.