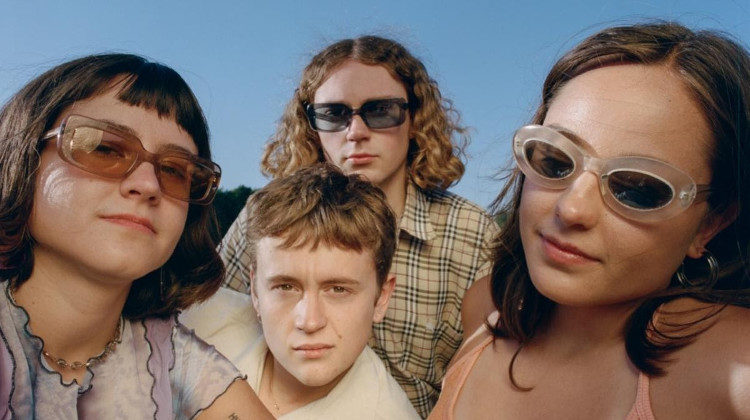 Halifax’s finest purveyors of indie ear-candy, The Orielles, stretch out and expand their art-rock sound into dizzy dream-pop and giddy space-funk textures on their magisterial second album, Disco Volador.

On their vivid, buzz-generating 2018 calling-card, Silver Dollar Moment, West Yorkshire’s The Orielles honed a refreshingly idiosyncratic and expansive take on those perennial staples of indie-pop, the gleaming C86 jangle and the furrowed brow of shoegaze. Now harnessing that record’s wonky, throwback charm with a heightened astral soundscape cloaked in euphoric and buoyant primary colours, their sugar-rushing new opus, Disco Volador, sees the trio-turned-quartet unleashing experimental instincts and adding a tropical zest and punch from the furthest reaches of the galaxy: maximalist songs like Come Down On Jupiter and Bobbi’s Second World roll seamlessly between library music’s wooziness, disco’s cosmic bounce and even jazz’s meditative rapture.

Effortlessly summoning ghosts of polyrhythmic funk-pop, Northern Soul and reverb-laden indie-disco anthems while targeting the more wistful reaches of the dancefloor, The Orielles navigate psychedelia and art-rock with dollops of full-bodied chutzpah and frantic imagination. Much to their credit, their myriad influences are subsumed into their alt-pop mantras without coming across as diluted or exploitative. Nostalgic and yet novel, Disco Volador assembles a series of sonic collages that radiate a pillowy alienation and a kinetic strut whilst keenly subverting listener expectations and preconceptions.

On occasion, The Orielles’ wandering propensity and obsessive tendencies get the better of them and threaten to cram too many elements into the same tune; if they can hunker down and embrace a more streamlined approach they could conjure a festival-headlining sweet spot that this ambitious set frequently threatens to hit. For now, it offers a rich and irreverent soundscape whose high points strongly suggest there’s a classic record to be coaxed from the precocious outfit’s potent synthesis of creative energy and mastery of form.