Home » articles » The Jaded Hearts Club: Nobody But Me – Single Review 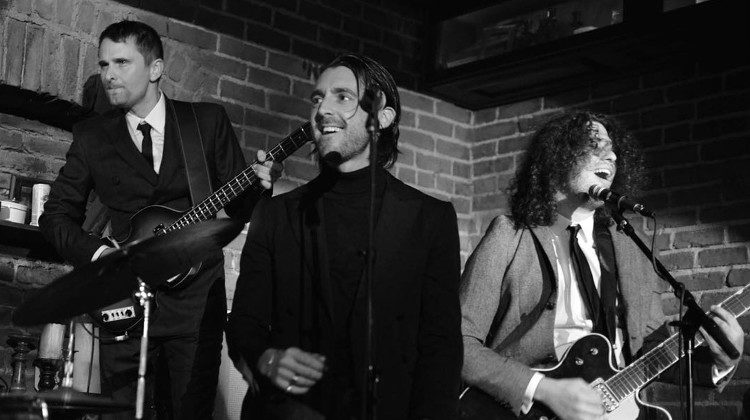 Put down your Amaretto cherryades, The Jaded Hearts Club are here to hotwire the weekend with new single Nobody But Me.

The Jaded Hearts Club comprises 3 huge British rock icons (Matt Bellamy of Muse, Graham Coxon of Blur and Miles Kane of…Miles Kane), and 3 random American blokes. Kitted out all in black, with leather jackets and classic Gretsch guitars, the band capture the awesome energy of four teenage boys from Liverpool tearing up Hamburg City. Sgt. Pepper is court-martialed, stripped of his medals, and unceremoniously booted out of the Hearts Club Band: make way for a new band of brothers to ‘come together’ in the sweaty underground, and watch out, cus’ they kick ass!

In all seriousness, this raucous rabble-rouser of a debut single is a solid, high energy wedding band crowd-pleaser: mining a rich vein of rocking and jiving 60s club music. Miles Kane as lead singer suits the song well; he is a cantankerous little gentleman, the exact man to take Nobody But Me back to America after staying in England. There’s not much space on the song for Coxon and Bellamy to exhibit their real guitar chops – these guys are known to regularly launch songs out of the stratosphere, sending their hot licks and solos to explore the furthest reaches of the ever-expanding universe – but the song’s success is in its cohesive group impact.

Nobody But Me is not a particularly cultured effort, but it’s a rollicking good time with its pulsing rhythm track, scorching guitars and call and response vocals. It’s fun and quite silly. It’s in the same spirit as Traveling Wilburys, the English-American supergroup featuring George Harrison, Bob Dylan, Tom Petty and Roy Orbison; it’s a hobby and a time filler for successful musicians past their prime and living in LA. It makes people happy and that is welcome news to my ears.