The Brook & The Bluff hit you right in the soul, producing what would sit nicely alongside your Stax Records, with their debut album First Place.

It’s not often that you come across musicians that are Birmingham raised, yet Nashville based – and you may think this results in an identity crisis. However, The Brook & The Bluff prove this wrong with their debut album First Place, encapsulating the Atlantic crossing in upbeat soulful pop songs, whilst lyrically describing the struggles of long-distance relationships in what is, overall, a warm record.

First Place has a slow start to the album, and could easily be mistaken as an attempt at a Salad Days-era Mac Demarco mixtape, with its luscious chords, simple beats, and overall tone. This is true up until the song Halfway Up, which, once the drums and keys kick in, transports you to the sunshine of Tennessee and begs to be played whilst cruising in a vintage convertible. The layering of instrumentation is complex yet beautifully structured, weaving between silence and a soul-fuelled mess. 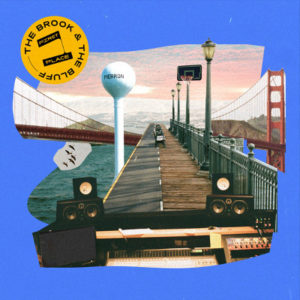 The one thing that is sure to keep The Brook & The Bluff’s head above water is the excellent musicianship – something that can only really be achieved in Music City. With the competitiveness of Nashville’s music scene, only the best of the best survives, and First Place is a clear example of this. Every note has meaning and nothing is underplayed or overplayed. In essence, it is just right, and the instruments chosen are too. Off the Lawn proves this best, with its angelic harmonies, and a guitar solo that is phrased stunningly.

What eventually holds First Place back is its lack of variety. All good albums have consistency in sound, but unfortunately, at times it can be difficult to distinguish one song from another. This isn’t helped by the long breaks of silence between songs, which consequently affects the album’s flow. However, these are minute issues and are easily forgotten once fully invested in the record.

The Brook & The Bluff may be the best-kept secret in music at the moment, and it may stay that way. Though their first EP charted on US and Canada Viral 50 Playlists (and have amassed 7.2 million total artist Spotify streams), their soul-bearing music, unfortunately, doesn’t fit the commercial mould of today’s climate. But let’s hope they don’t change for our sake, as First Place is an album that should be in everyone’s record collection.