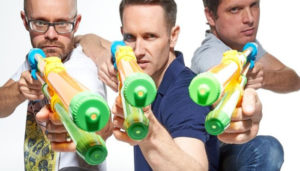 Indie-rock veterans Ash are gearing up for a special ‘Best of’ release celebrating their career spanning over 25 years. Entitled Teenage Wildlife (a call back to the documentary highlighting the rise of the band in their youth to releasing their classic debut record 1977), the album features all the well-known hits such as Girl From Mars and Burn Baby Burn, to fan favourites … END_OF_DOCUMENT_TOKEN_TO_BE_REPLACED