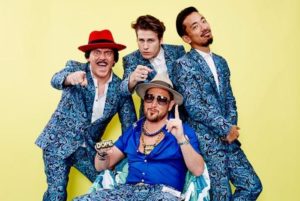 We take a look at the new record from soul/funk/comedy outfit The Cuban Brothers, as they reinvent tracks by their favourite artists that can lighten up even the darkest day. Mike Keat (aka Miguel Mantovani), the moustached maverick at the centre of The Cuban Brothers, probably had no idea the band would get this far and with this amount of acclaim. Primarily starting as a … END_OF_DOCUMENT_TOKEN_TO_BE_REPLACED