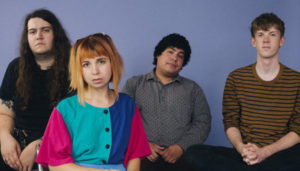 Chicago-based band Beach Bunny have announced their eagerly anticipated debut LP Honeymoon set to be released on Valentine's Day (February 14th) in 2020. The record will be released through Mom + Pop, following on from four self-released EPs that include fan favourite and big streaming hitter, Prom Queen.  The four-piece, fronted by Lili Trifilio, have created a sound that … END_OF_DOCUMENT_TOKEN_TO_BE_REPLACED