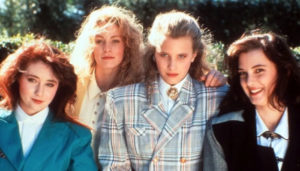 Cult-classic movie Heathers is set for a reissue on vinyl for the first time since it was released back in 1989. It’s part of the 30th anniversary of the high school dark comedy which will come on ‘very green neon vinyl’ and feature music from the movie by composer David Newman. Newman is also famed for his film scores on movies such as Ice Age and Anastasia. The movie … END_OF_DOCUMENT_TOKEN_TO_BE_REPLACED