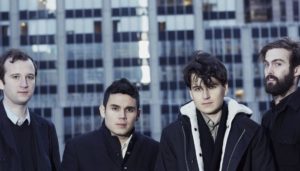 Vampire Weekend return with new record Father Of The Bride, skillfully dealing with difficult messages amongst a more mature sound. A long time has passed since Modern Vampires of the City - the last album from Vampire Weekend - was released. There were, therefore, big expectations surrounding new record, Father of the Bride. For this album, Rostam Batmanglij has left the … END_OF_DOCUMENT_TOKEN_TO_BE_REPLACED