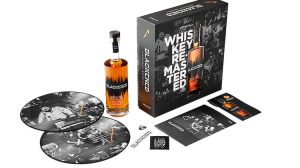 Metallica release a special edition box set of their 'Blackened' whiskey, aged by the band's music and featuring two vinyl picture discs. For fans of Metallica (and alcohol), you may have already heard about their 'Blackened' whiskey. The whiskey is a collaboration between Metallica (mainly drummer Lars Ulrich) and Rob Dietrich who acts as Master Distiller and blender for … END_OF_DOCUMENT_TOKEN_TO_BE_REPLACED