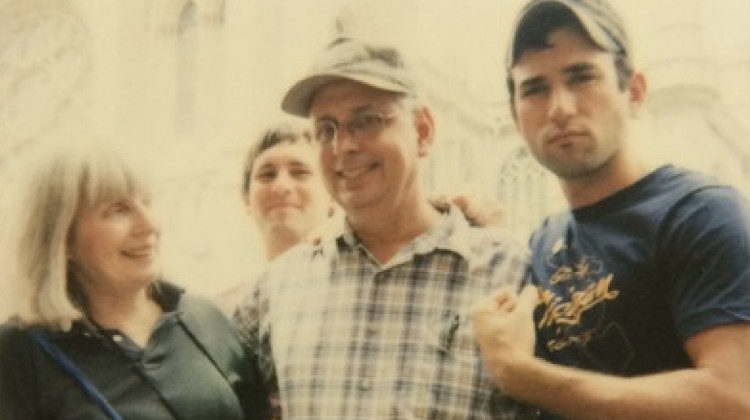 In which the baroque folkie and sound sculptor par excellence reunites with his influential stepfather to plunder a series of captivating, tautly constructed ambient New Age synth-wave hymns from years of circuitous jam sessions; a thrilling musical conversation of unsettling and uplifting aromas that pays exquisite homage to mentoring and a shared personal history.

There’s something weirdly reassuring and comforting about Sufjan Stevens’ latest idiosyncratic side project in a spellbinding, diverse and adventurous career that’s encompassed many curious and unexpected left turns.

If you’re already on board with the wispy-voiced creator of my favourite albums of the century so far, Illinois and Carrie And Lowell, then you’ll be au fait with Lowell Brams as well as their author’s propensity for striking out in unexpected directions. Brams is Stevens’s stepfather, immortalised throughout the latter opus, the co-honcho of his Asthmatic Kitty label and collaborator on Music for Insomnia in 2008. With every new release, the multi-instrumentalist is retreating from his original milieu as a purveyor of dainty, evocative strums; the arrival of the sprawling Aporia adds more fuel to the notion of him being the great maximalist inquisitor of our age.

Stevens himself describes the twenty-one cuts assembled on Aporia (the Greek word for ‘at a loss’, which will surely resonate, given our current pandemic anxieties) as a sequence of “little magical moments”. This seems an apt summation, as this predominantly instrumental exploration culled from years of jam sessions in New York possesses an enchanting, unrehearsed looseness that’s largely lacking in Stevens’s work. John Carpenter, Boards Of Canada, Wendy Carlos, Iasos and Pauline Anna Strom provide obvious touchstones, as well as the electro-acoustic mist of Tycho and certain strands of post-rock flavours.

Kicking off with the fluttering Ousia, the creative energy here is directed towards deeply atmospheric improvisations with subliminal twinkles that appear to bubble out of swelling and surging synth patterns, imparting an equal measure of dystopian unease and green-as-gold nostalgia.

Hazy, sleepwalking beats and analog-decayed production usher the listener on a journey through Eno-like serenity on the spangly, halcyon memory reverie of Disinheritance, What It Takes and Determined Outcome to Misology and Backhanded Cloud, where choral voices and murder strings summon feelings of tension and disquiet. The deft, arpeggiated synths and Krautrock pulse of Captain Praxis nestle comfortably alongside the icy ambience and modulated guitar of Eudaimonia.

Aporia is best appreciated as both a two-faced beast, a richly evocative meditation on the power of synths and a tender-hearted homage of sorts to Brams himself, who gave Stevens his first keyboard and four-track recorder as a child and helped him find a record label back in the late nineties. This is best ingested through osmosis; kick back and let the smeared synth-tones of its yoga retreat sonic landscape provide a strangely gripping and gratifying ride.