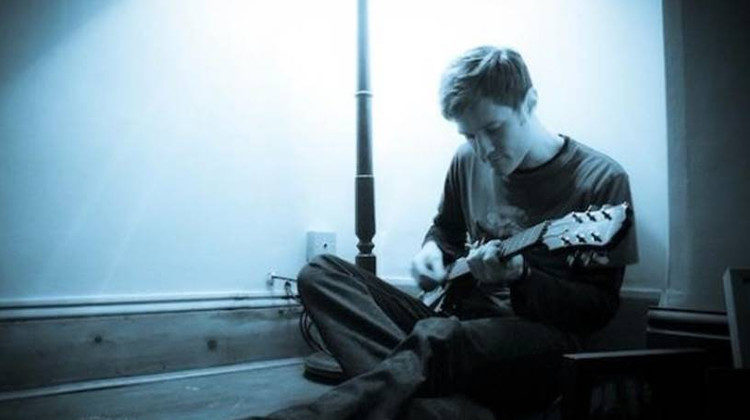 Ever wondered what a Bristolian music producer would create if confined to their bedroom and cast adrift from the hippy-dub mainland? Well, your answer is with Stumbleine: algorithmic Youtube Chillwave.

Throughout Stumbliene’s newest album, Sink Into the Ether, the Big Chill-Out in the sky is made to feel like a morning commute. As ever, a combination of daydreamy post-rock chords and dubby production techniques results in an unsurprisingly plain, inoffensive musical concoction. The ingredients may satisfy an easy-listening internet market, but it could do with a bit of salt and pepper.

These songs, lacking a meaningful content of their own, are crying out for a context; maybe this is how independent musicians are being forced, consciously or otherwise, to survive and make a career in the industry, producing genre-variations on ‘lofi hip hop radio – beats to relax/study to’. Another potential Youtube genre that springs to mind when listening is that of football compilations. You can perfectly imagine the jabbing beat of Lost To The World punctuating the explosive moments on a ‘Victor Lindelöf Best Tackles | Interceptions | Passes’ video with half a million views, or perhaps even ornamenting the latest Fifa menu system. There is a real musician inside Stumbleine weeping inside a digital prison, not knowing what to do with his gamut of influences (Foremost Explosions in the Sky and Burial).

At best, Sink Into The Ether offers a passing similarity between Stumbleine and M83, where the overblown, gauzy washes of sound stem from a knowing excess of sentiment. But there’s more than a little Eurovision about Sink Into The Ether, an institution that encourages artists to warp all sense of individuality into naive, innocuous pop balladry. On the cover of Hole’s Malibu, for instance, Stumbliene employs a singer with a vaguely Swedish-sounding pixie voice to intone on romantic abandon: “I knew love will tear us apart/ I knew the darkest secret of your heart/ I’m gonna follow you / I’m gonna fly away.” Sink Into the Ether is what you might expect Conchita Wurst to produce on Garageband given a few hundred hours and force-fed 50 biftas a day. Another example is Tidepool, which appears to have been built entirely upon a looping vocal segment of what I can only imagine is a Kodaline soundbite.  This is the anodyne, instrumental, ambiguously ’emotional’ music Youtube selects on a summer’s day when you’ve left your laptop autoplaying in the bedroom and taken a walk in the park. The pleasant, balmy swirl of songs like Words Fail Me seems to have been animated by this digital selection process.

This is music which remains very much at the surface level, for passive listeners. The new muzak – mass-produced mood pieces, noise to accompany a certain moment or as background in a vlog – will not be centralised, but made by ‘ individuals’. This is muzak on which you can comment: “38,000 views? I think Youtube is glitching, it’s only showing how many times I listened to it!”, or “this is real music, not that mass-produced pop crap”, or “I love this song, I hope my neighbours do too!” The real emotive hits may even prompt something along these lines: “This band nearly saved my best friend’s life…she would have been 63 tonight. R.I.P.” This is our demise, as genres of music devolve into genres of easy-listening, and indifference comes to dictate the music itself, in the vicious, yet logical, cycle of 21st Century listening.

Towards the end of the album, I started to wonder how it was possible Stumbleine hadn’t yet run out of finger-clicks on the Logic Pro database. I also started to wonder if I wasn’t being a little harsh on Sink Into The Ether. White Noise Therapy is a little more interesting, but still reliant on a diluted strand of post-dub deconstructive beats. Perhaps a futuristic anime production company will make use of the song, utilising its wide-eyed and hopeful cinematic qualities. Your Angel Was a Fake is another song that could work well in the climax of a science-fiction movie and Disintegrate Together is a worthy impression of Bibio’s vintage sounds and lovelorn guitars.

Ultimately, the mood-pieces on Sink Into The Ether will satisfy many, but the album’s implementation of the post genres (post-rock and post-dub) cancel each other out: a preening attachment to childish notions of the sublime clashing with the hauntological notion of sampling and nostalgia captured by Burial. Sink Into The Ether exhibits all the most comfortable and one-dimensional aspects of the internet, without truly capturing the precarious experience of memory and existence that Stumbleine could have focused on for the internet-browsing generation.