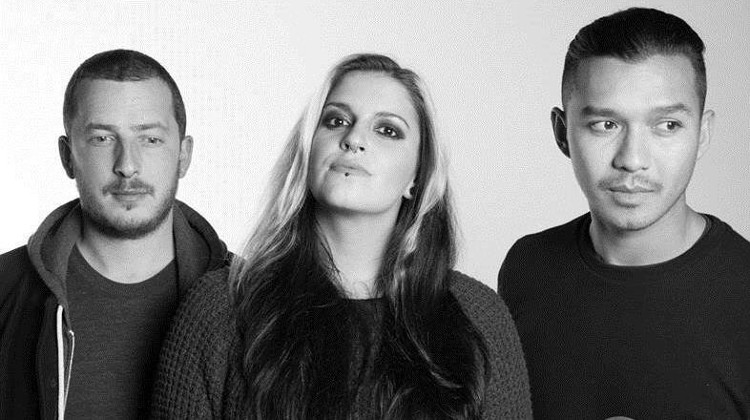 Formed in 2008 by their mutual love of music from “our own time, the beginning of time and all points between”, British trio Snow Ghosts return with their four-track EP Real World Sessions. With an interest in British folklore and experimental electronica, their work is bound to always be a unique listen; however, with the addition of composer Toby Young and John Kenny (who in 1993 became the first man to play the Celtic Carnyx in two millenniums), this live EP was bound to be on a whole new level.

First track, Heavy Heart, is introduced by an organ that swirls the stereo spectrum, yet it isn’t until vocalist Hannah Cartwright opens her mouth for the first time that you are truly captivated. It is powerful, perfectly in tune, and once she begins to belt (towards the end) it is heart-breaking. Amongst the intricacies of the classical instrumentation, are layers of drum pads and synthesised bass. Completely altering the song, this addition takes a run of the mill song to something special.

Bookending the EP is a remix of Heavy Heart by the masters of atmosphere, Mogwai. With no disrespect to the original live recording, this will be many people’s preferred version, as the remix proves why Mogwai are so good at what they do. Featuring a lot more electronic instruments and electric guitars, it adds something that you otherwise wouldn’t notice was missing. Not only this, but the post production on the vocals (which incorporates a vocoder behind the lead track) gels a lot better in the overall mix. In fact, everything moulds better, which perhaps may be a result of the majority of string instruments being hidden.

John Kenny’s Carnyx performance is finally heard in second track, Ribcage. Snow Ghosts undoubtedly know they are lucky to get one of the few musicians in the world to be able to play the Iron Age instrument – and we the listeners should feel lucky too. It makes an already dark track exponentially darker. A menacing sound unlike any other, it squeals and hawks amidst the harmony (you can see why the Gaelic warriors used it in battle). Unfortunately, despite Snow Ghosts undeniable talent, they once again are outshone by an external musician(s).

The final song, Spinners, is drenched in drones as Cartwright rhythmically chants and flutters her voice. This particular track showcases the trio’s interest in historical music, as it could easily be a medieval folk song, with the monotonic harmonies in the chorus fuelling this further. The introduction of electronic oscillations in the middle of the track takes full advantage of both left and right speakers, especially spinning the head (pardon the pun) with headphones on. Though there is no reference to religion, if played loud in a cathedral it is sure to create a holy experience.

Overall, Real World Sessions is a strong EP. It isn’t for just any time or day – and definitely isn’t to be shuffled amongst your digital library – but when in the right mood it is an experience worth having. Demanding your full attention, it will tire you; however, this seems to be Snow Ghosts intention. The one drawback is the trio’s reliance on John Kenny and Mogwai to propel the tracks, with the latter making the original recording almost redundant.