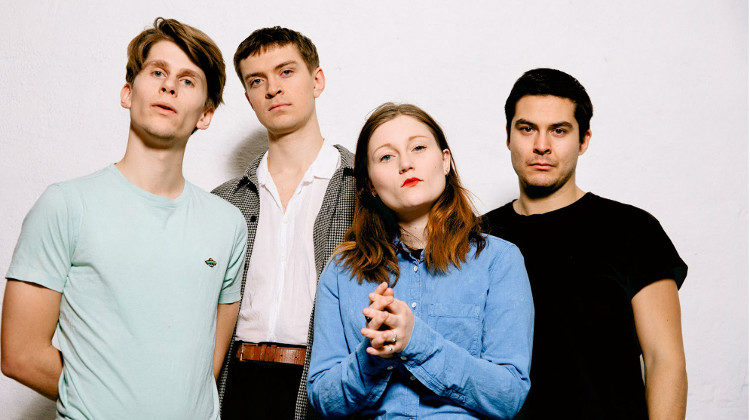 Norway’s Sløtface release Sorry for the Late Reply, as this extraordinary and original band try out their latest songs in prisons across Norway.

There is an interesting culture mixture on Sorry for the Late Reply as mainstay band member Haley Shea writes about her cross-culture references as an American living in Norway. With American parents, she details the subjects of climate change and talks about rage, confusion and vulnerability, but the interesting thing about Sløtface is the feeling of a singer singing to you in a very personal way. It’s as if it’s coming from your best friend, telling you about their day or a conversation overheard at a bus stop. The subjects picked for these songs range from the global and environmental to the very small and very personal. This style reminds of early eighties music when artists were not afraid to sing about the trivial moments in life. In this regard, I am strongly reminded of early tracks from The Smiths, Squeeze, and Elvis Costello.

As the songwriter pulls out these personal, tiny details about themselves with wit and flair, it connects us with their human qualities and the trivial fails we all face from day to day as human beings. Sløtface is happy to investigate apologetically those little quirks and failed good intentions that make us all the more human and all the better for it. Even the album title is an apology. This over apologising I would usually flag up as an English/British trait rather than Norweigan/American one, but I think the style of songwriting and the attention to detail shown on this album will go over well with a British audience; we are used to small labels with big themes and ambitious artists.

The track Stuff is a jerky and distorted affair all about our obsession with consumerism, the chorus of which had the hairs standing up on the back of my hands… not that I have hairy hands, but you know what I mean. There is an original and yet familiar feel to this music. There is also a very relevant track for this time of the year in New Year New Me which is perfect at highlighting those little things we all do: “I Keep hoarding books I’ll never read and making plans I’ll never keep New Year New Me’ is the greatest lie I always tell myself.”

I highly recommend this album to chase away the January Blues and to put those failed resolutions into perspective. Sorry for the Late Reply is a fresh slice of ‘Suksesskake’ (Norwegian Success Cake) mixed with a healthy side order of biting wit and eighties inspired charm.