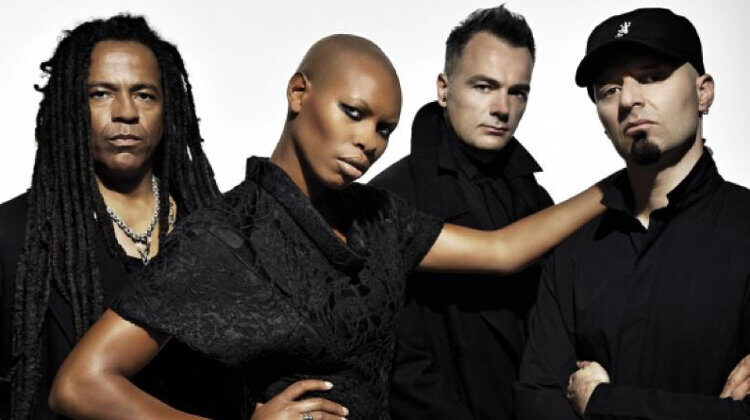 Skunk Anansie were a band raised out of the London music scene who truly grabbed the brass ring of British Rock with their debut album: Paranoid & Sunburnt.

In the mid ’90s there were a great mix of rock bands from all over the world coming to the attention of the media and music fans alike. Although the female-fronted bands had become a popular format, when Skunk Anansie broke they bought something very different to the table. With politically charged themes, thought-provoking lyrics mixed with hooky melodies and roaring riffs, Skunk Anansie defined an era in British music.

A band consisting of the classic format of bass, drums, guitar, and vocals, the four-piece had a secret sonic weapon in their arsenal in the form of singer and songwriter, Skin. The force of nature that is Skin is the focal point of Skunk Anansie. Her unapologetic outlook on life and untapped rage for injustice is balanced by angelic, edgy but soulful vocals. Skin has surrounded herself with a band of brothers in the form of axe man ‘Ace’, Bass virtuoso Cass Lewis, hard-hitting drummer Mark Richardson and non-band member but songwriting partner, Len Arron.

Paranoid & sunburnt was recorded over several sessions between 1994 & 1995. The LP was recorded in the Great Lindor Minor, a 17th-century mansion converted into a recording studio. The sessions were overseen by TOOL producer Sylvia Massy and mixed by mixing desk supremo Andy Wallace. The album was released through the One Little Indian label and hit shelves on 18 September 1995.

This debut outing opens with SA’s first single, Selling Jesus with Skin and Co leaving no room for guesswork on their songwriting direction. Heavy guitar licks, with pulsing rhythms lay the scene for the cutting lyrics. “They’re selling Jesus again; they want your soul and your money your blood and your votes” wails Skin in the chorus before she sings beautifully about “Selling Love” to us all.

If Skunk Anansie have left you any doubt of what they are all about, the second track “Intellectualise My Blackness” will fill in the blanks. A thunderous tale of sexism and racism.

In track three the foursome flexes their commercial muscle with the anthemic I Can Dream. The spin opens with a groove drenched bassline by Cass, which forms the backbone of the whole song. Yet another singalong hook chorus from the singer, “I can dream that I’m someone else” “I can love, whoa, love someone else” A truly universal lyric we all can relate to at some point in our lives, no?

Don’t let this third little ditty lead you into a false sense of security because Skin and the boys are just about to punch you hard in the face with Little Baby Swastikkka (three k’s is no spelling mistake) and you’re not going to have chance to check whether you’re bleeding or not as the emotional blows just keep raining down. This continued pattern of hard-hitting and emotional songs lasts throughout the entirety of the album.

Even the hit song on the cut, the namely Weak is an absolute rollercoaster ride, a three minute and thirty-two seconds that gives you all the ups and downs like you’re at the American Adventure theme park.  The sound coming from the backline is catchy and uplifting but with lyrics such as “If I opened my he heart, there’d be no space for air”, “In this tainted soul in this weak young heart“., “Am I too much for you?”, and the chorus hook “Weak as I am, no tears for you”.

The album keeps you on the ropes, at unease, and on tenterhooks all the way through. Paranoid & Sunburnt is anthemic at heart with an undertow that drags the listener under, gasping for air.  Calling from experience, It amazes me how some can happily listen and even sing along aloud to bands or artist that have come straight out of Compton, but find it uncomfortable to hear a young black woman using and singing similar language and, in some cases, being offended by proxy.

Skunk Anansie’s debut went on to be certified as platinum in the UK and lead to a further five albums. They were the first musical act to perform live on the now legendary UK show, T.F.I. Friday. A BIG highlight also earning a headline slot on the pyramid stage at Glastonbury 1999.  Sans a little seven-year break for side projects, the four-piece are still going strong to this day, releasing a AA side single earlier this year.

In closing, Paranoid & Sunburnt was a triumph of an album for Skin, Ace, Cass, Richard, and Len. It clearly gave the singer a stage to voice her frustrations on life and society, which Skin did with class, organic execution, and without cliché.