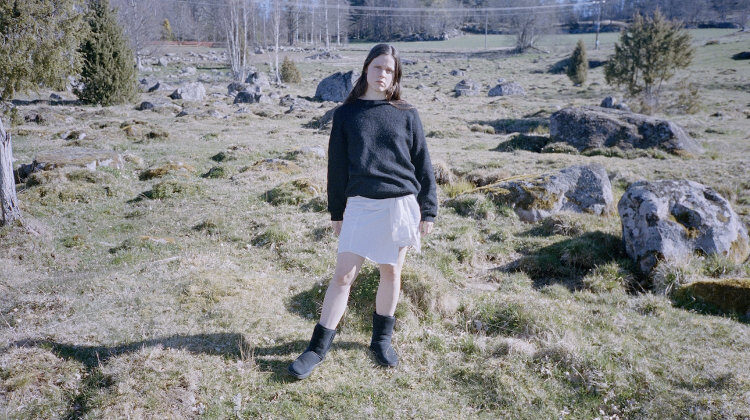 After much anticipation and pushed back deadlines, Swedish star ShitKid, (otherwise known by her family and friends as Asa), has released her new album 20/20 ShitKid. Keeping her fans on the edge of their seats, these 8 tracks are full of Indie Punk goodness.

Kicking the album off with 885 (Navy), the distorted guitar intro is something that is completely different from anything being released at the moment and is something that ShitKid excels at; standing out from the crowd. However, this track requires your full attention to completely appreciate everything it has to offer; putting it on in the background whilst you complete other tasks just won’t do as ShitKids vocals and lyrics get a little lost within the hectic guitars. Nevertheless, this track is a perfect opener to set the tone for the rest of the album.

Next is FarmBoy, and with a scary sounding funhouse opening, there are so many different routes this track could take us down. The repeated use of ‘la’ takes us almost into a scene from a horror film where the child is possessed. The dark atmosphere is eerie yet extremely gripping and as soon as the electronic drumbeat kicks in we are transported to a new dimension. It’s tantalisingly full of different layers and moments keeping you entertained.

Each track on this album is unique and holds its own style whilst not stepping too far out of the expectations that are held of ShitKid and her music. The synth that plays the intro in Waste Of Time sounds like something you would expect from the 80s and it manages to fit in and work well with the rest of the album. The big cymbal crashes in the chorus not only take us back to her roots but excite us for when she will be able to tour. The atmosphere here has the potential to fill in a live setting sound that’s almost too good to be true.

The album ends with Stubborn Signs which is a massively stripped backtrack in comparison to the previous ones. The simple instrumentation allows us to focus on the lyrics, a complete turn round from what the previous tracks offered. It’s the first where the lyrics are the prominent feature and the storytelling is what grabs us.

ShitKids instrumental effects and big noises are what make her album unique but taking a break and showing off her talents through raw emotion is something that I think was needed and really makes 20/20 ShitKid stand out. It’s important to listen to this album at face value and see what ShitKid can achieve. I really don’t think there is much that she can’t do and that is why this anti-popstar is one to experience.