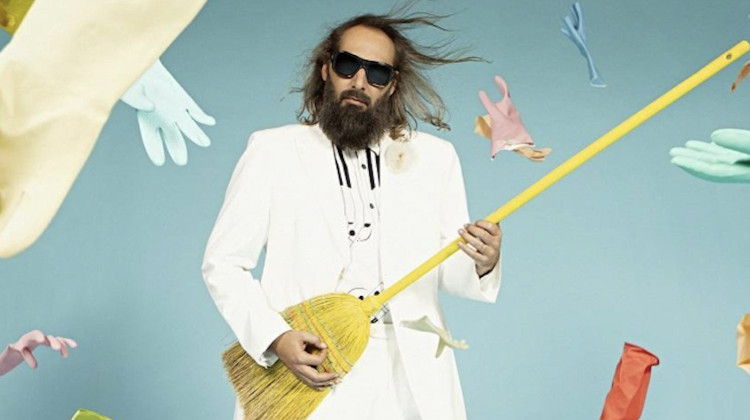 Sebastien Tellier offers up his latest full-length record in Domesticated, a synth-pop exploration of a new-found familial contentment, cementing his knack for confounding expectation but is lacking in depth and his usual va-va voom.

The impact of domesticity and a settled family life upon creativity is a familiar theme that’s been explored in the arts on numerous occasions; Cyril Connolly’s “pram in the hall” quote embodying the premise that an artist has to be free-spirited, footloose and fancy-free in order to produce good work. The Parisian composer, singer and multi-instrumentalist Sebastien Tellier – a man whose name has long been synonymous with a certain dandyish, louche chic as well as a proclivity for striking out into a plethora of directions – has turned inwards and into the routines and rhythms of family life with his wife and children for the muse for his latest long-playing foray of froth, Domesticated.

The result is an electronic pop confection whose sober ruminations on new manifestations of contentment and the taming of his previously waywardness belie the zesty, 80’s-indebted synth-slithering electronica aesthetics on offer throughout. Tellier’s reach has exceeded his grasp on occasion, but this genre-hopping ambition has yielded some dizzying peaks: 2005’s epic single, La Ritournelle, and his thrillingly cinematic 2013 Confection album spring to mind. In contrast, the under-powered homogeneity and comfort-zone padding proffered here arrive as something of a major disappointment.

On the opening A Ballet, Tellier queries whether “maybe the key to happiness is there, hidden under a dirty laundry basket?” Under a re-purposed trap beat, electronic chirrups and a blast of spooked and fibrous bass, the insertion of a velvety, Careless Whisper-ish saxophone adds some yacht-rock ballast to the singer’s ghostly, Vocoder-laced vocals.

Stuck In A Summer Love is one of several pieces harking back to a Pitchfork-approved incarnation of the chill-wave trend, all floating, circular synths and washed-out, Random Access Memories inflections. Domestic Tasks unfurls like a spidery synth ballad by Air, though enveloped by an incongruous crescendo of noise in the middle. The rippling synths and shimmering melody of Atomic Smile represent the record’s high point but the cloying longeurs of Hazy Feelings and Won are disappointingly beige and nebulous choices with which to close out the album.

Tellier’s best music has frequently inhabited and defined a Parisian buoyancy and swagger, offering solace, soulfulness and a verdant expansiveness. Rather than advance upon this and crystallise new beginnings, Domesticated is characterised by a lack of novelty, hooks and adventure.