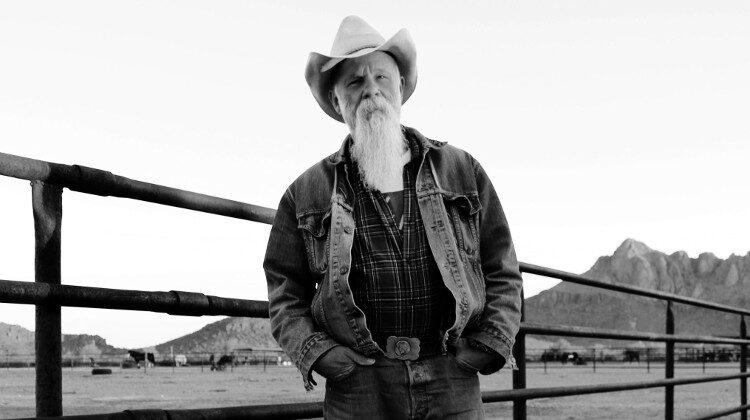 Seasick Steve is back with his 10th studio album Love & Peace, living up to his strong mythology amongst accessible and heartfelt blues.

It all began way back when with the release of the fantastic Dog House Music in 2006. Steve is just one of these artists that connect with me. His whole attitude and his music hold a strong resonance and vibration that creates an irresistible atmosphere about him.

I am not sure whether it’s his disarming honesty, his gentle authenticity or his catchy tunes but any man who spends time creating guitars out of cigar boxes has to be a decent down to earth kind of guy. What I really like about this album is it’s a total departure from the usual type of music I would listen to; Seasick Steve brings Blues to the masses and takes the mystery out of it.

Title track Love and Peace is directly connecting and engaging and has a feel of Bob Dylan with a quick channelling of John Lennon. It is the stand-out track and has a gorgeous feel to it. This one expresses a simple concept in a song to stop hatred and spread love and peace. All the best songs are simple ones. This track starts with a simple strum and finishes up a vibrating anthem of love.

Church of Me Is a gentle biography of independence. In other words, religion is okay for some people but I just need to do my own thing. Seasick Steve sings this in such an honest way that it would be impossible to be offended by anything he says. He has been criticised in the press for fabricating stories about his past. This isn’t accurate according to the man himself: “When I wrote a song about leaving home before I was 14, and a song about roaming around jumping trains as a stupid teenager, and a song about being locked up – I wrote it because I did all those things.”

My feeling about this is it’s just all showbusiness. People want a myth. They want mystery and Seasick Steve gives them that. It turns out he wasn’t a hobo who happened to get lucky; he’s a musician with an awful lot of talent and creative imagination. If his character is an exaggeration then it’s a skilful exaggeration that has kept both fans and critics alike enthralled by these tall tales which all create part of his persona. Don’t all performers need to have an enhanced persona to amplify their music and their connection with the audience?

Anyay, back to the music. Travelling Man just has that beautiful ‘Front Porch’ feel and reminds me of the supergroup collaboration ‘The Travelling Wilburys’ some years ago. Once again it’s charm is in its simplicity. The final track on the album is Mercy — “When I draw my last breath who do you think I see, there you be little Mercy staring right back at me” — It reminds of George Harrison’s spiritual songs such as I Wish I Knew. This is Blues played with heart and no tricks.

Seasick Steve is an extraordinarily unique character who makes dirt road American Blues accessible and relatable on a global scale. Love & Peace lives up to his mythology.