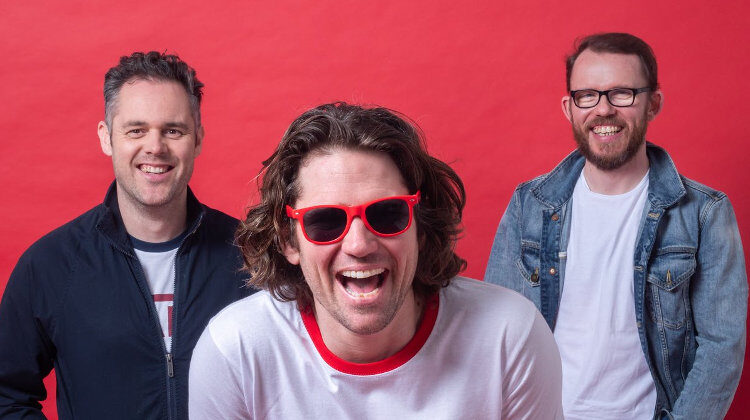 We caught up with Scouting For Girls frontman Roy Stride to get the lowdown on the band’s new eighties-inspired cover album, Easy Cover.

The COVID-19 pandemic has had an impact on just about everyone over the past year, and Scouting For Girls are no exception. However, like many people, the band used the spare time they found themselves with during lockdown to produce something that would cheer them up. The result? Easy Cover: a collection of eighties hits by artists ranging from Tears for Fears to Cyndi Lauper, all with a Scouting For Girls spin on them.

We spoke to lead vocalist Roy Stride about the origins of the album, the title of which is a play on the song Easy Lover by Phil Collins and Philip Bailey. The record went through several titles including Scouting For Girls Just Wanna Have Fun and Cover Chameleon and, as it turns out, the idea for the album came about far earlier than we would have imagined.

“It was a very drunken night on a tour bus coming back from a tour in Ireland where we were all dancing around to Phil Collins in our boxer shorts,” Stride tells us. “It was four in the morning and somebody suggested that an album of eighties covers featuring Easy Lover that should be called Easy Cover. At four in the morning that seemed like the best idea of all time.

We did wake up and think that was the stupidest idea of all time, but then lockdown happened and I sort of thought, well, sod it, let’s do it. That tour bus ride was ten years ago and now, ten years on, if it wasn’t for lockdown I doubt we would have done it. I needed something to cheer me up and that’s what it did.”

Stride later pulled out the very album that began it all: Serious Hits… Live! by Phil Collins. “Now this double album is everything I love about vinyl. Look at this, it’s just such a beautiful package: double gatefold, loads of notes about everything that’s going on… you can spend like half an hour just looking at this stuff. I love Phil Collins, and Serious Hits Live is probably one of the best live albums of all time.

In terms of the production, the sound, the playing, it’s so good, but this is the album we were listening to when we came up with the idea for Easy Cover ten years ago. I’m a big vinyl obsessive and everything about this is so good. It’s a great live album – if you like a bit of Phil Collins you’ll love that.”

As one would expect, the lockdown recording process was out of the ordinary, with Stride beginning most of the work by himself due to fellow bandmates Greg Churchouse and Pete Ellard being in different parts of the country. “It was a pretty lonely process because the guys couldn’t really come in until the summer,” he said, but this didn’t stop him from having fun.

“As a musician spending a lot of time in the studio, it’s funny how I spend my life either with loads of people on tour where you can’t get away from anyone or a lot of time just by myself writing songs. I’m actually pretty comfortable both ways. I do love being by myself. So the first part of the process was pretty lonely but I had a really good time doing it. If there was a studio camera it would have caught me dancing around like a bit of a lunatic whilst I was recording these songs. I had a great time.”

When asked about whether he had any favourite tracks from the album, Stride answered with the opening anthem, Everybody Wants to Rule the World. A song from his childhood, Stride talks about how the Tears for Fears hit brings about all kinds of nostalgia. “That was actually one of the first songs I ever remember hearing as a kid and the original version still gives me goosebumps. It takes me back to my childhood bedroom, and it was actually the last band I saw before lockdown, Tears for Fears. A bit of a circle there, so I really enjoy that song.”

Created with the aim of having fun, Easy Cover is the latest example of what Scouting For Girls do best: making others feel good. But Stride himself remarked that a lot of this comes as a result of the band’s own enjoyable experiences while making music.

“I think, without trying to be, we’ve become a band that people know they’re going to come away feeling better. They’re going to have a good time, and I think maybe it’s because we just have such a good time whilst we’re playing. The songs are very happy and positive and upbeat.

When I first started doing these covers I did quite a serious version of Easy Lover and I remember I sent it off to Greg and Pete and all they replied back was an emoji of a shrug. They were just like, this is not what people like from Scouting For Girls. Obviously, we have a few ballads, but mainly it’s fun and that’s kind of what we’ve tried to do with this record. It’s fun and upbeat and hopefully, it will make some people smile.”

That said, Stride reiterated that Scouting For Girls don’t make music because they think it’s what fans want to hear, but rather, they produce music that makes the band happy and fans love it regardless. Even their songs that are a little on the sadder side lyrically are still relatively upbeat in terms of music, which Stride described as “the band and the music at its purest form.”

He continued: “Like, She’s So Lovely or Elvis Ain’t Dead, this sounds a bit wanky but they are like a true expression of who I am as a person. When I try and be something that I’m not – because I am a very happy, upbeat, positive person most of the time – if I try and be quite serious or introspective it’s not honest to who I am. I think that where we’re most successful as a band is when we do that, and sometimes that involves us just dicking around a bit. That is what we do and that is true to who Scouting For Girls are. I think that’s what people like about us as well, so I feel that is what Scouting For Girls is – and it’s not like I’m trying to give people what I think they want: if I give them what I really am, that’s what people enjoy.”