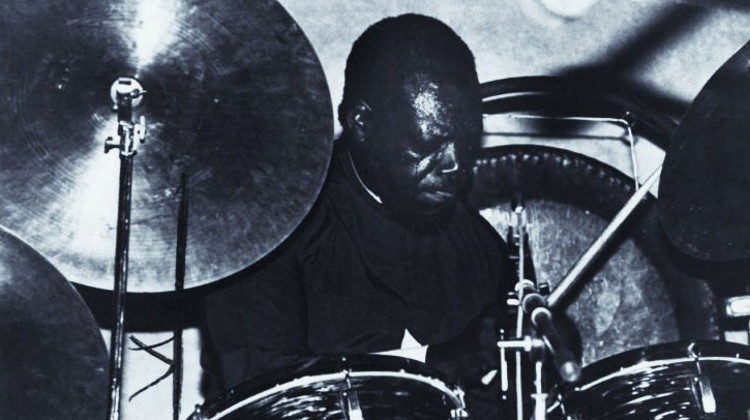 The drummer Roy Brooks was a pillar of the Detroit jazz scene of the 1960s and 1970s, predominantly known for his sterling support for household names such as Yusef Lateef, Pharoah Sanders, Horace Silver, Charles Mingus, Dexter Gordon, Lee Morgan and Sonny Stitt.  One of his lesser-known but most distinguished outings as a leader, The Free Slave, has recently seen the light of day again on vinyl, and it’s a fascinating document of several, disparate strands of jazz spilling into each other. Recorded as a live set at Baltimore’s The Left Bank Jazz Society in 1970 and issued two years later on the New York imprint, Muse, The Free Slave is highly regarded and venerated amongst the jazz cognoscenti, yet its hipster cachet has bafflingly never translated to a broader audience.

Powered by an all-star cast including such luminaries as trumpeter Woody Shaw, pianist Hugh Lawson, tenor saxophonist George Coleman and bassist Cecil McBee, The Free Slave captures the genre in flux, at an intriguing moment of transition: on the cusp of decamping from both mainstream radio playlist exposure and a pivotal position in pop culture just as a host of independent, homespun labels like Black Jazz, Strata East and Tribe emerged to harness its restless invention and experimentation away from the mainstream, the advent of jazz-rock, fusion and electric-jazz.

This beautiful record eschews the deep groove and abstract palette of electric, post-modal Miles Davis, Herbie Hancock, Donald Byrd et al as well as deviating from the Blaxploitation holler of Archie Shepp. Its pleasures are numerous, subtle and fluid; across its four luxury-length tracks the music slips between slinky and lyrical soul-jazz, straight post-bop and impressionistic avant-garde styles whilst tying them together and burrowing deep into a rarefied mysticism.

The set commences with the busy title cut, in which the leader slaps down a rattling funk beat for Coleman’s barrelling tenor and Shaw’s rasping horn to combine and juxtapose to exhilarating effect; Lawson contributes a series of agile and graceful piano runs here. Understanding is a relaxed, lyrical and pretty meditation, not a million miles from the 1960’s Blue Note sound; it is distinguished by McBee’s elegant, prowling bass, a wondrous trade-off between Coleman and Shaw and some of Lawson’s most mellifluous and euphonious piano improvisations. The twelve-bar blues of Will Pan’s Walk showcases the ensemble at its most powerful, with Shaw’s trumpet taking centre stage before Coleman’s expressive bursts, Lawson’s piano vamping, Brooks’s percussion arsenal of cymbal and hi-hats and the supple foundations established by McBee tip the outro towards Coltrane stylings. The album concludes with the ineffably melodic Five for Max, a dulcet, airy ode to another drumming legend, Max Roach, in which Brooks utilises his ‘Breath-a-Tone’ technique, an invention featuring rubber tubes that alters and toys with the pitch of the drums.

Mapping out a sinuous and poetic territory situated somewhere between funky 60’s jazz, urgent hard bop and the spiritually inclined, Afro-conscious modal output of the Strata East label (Clifford Jordan’s monumental Glass Bead Games springs to mind), this truly is an album for the ages, a veritable classic of vintage music-making.