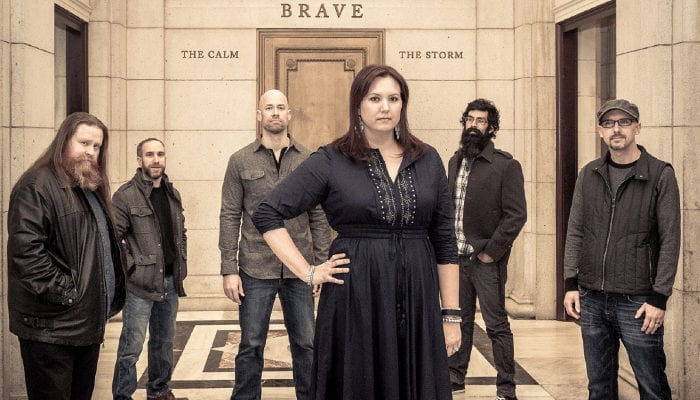 Brave return with new full-length record the calm | the storm, and with it bring an album playing on both the heavy and the serene, with an impressive mix of genres.

Sometimes, when a band has an extended break from releasing music, they lose that special something. Life happens, interests wane and priorities change. This isn’t the case for Brave, however. New record the calm | the storm follows the band ethos of not adhering to current trends, and instead they write the music for themselves, first and foremost. This tends to bring out the best in any band, and with their rock/metal sound as the basis for the new record, it makes for an interesting record as other genres find their way in.

I Will Wait starts off with enticing piano leading into heavily distorted guitars and feedback; this is showing you exactly what this band are all about right from the start: heavy rock. Think Evanescence meets The Gathering. Bass then enters to play around Schrotz’s vocals, as the deep lyrics deal with love, loss and death: “ I will wait until I fall, there is no other way”. 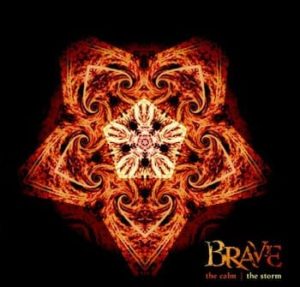 Mystery kicks in with a riff-laden intro, and you can immediately hear the band having fun. With silky solo’s, raucous guitar slides, and tight playing, they even add in a few subtle synths. Once again, this all fades out once the vocals kick in, with the bass mercilessly keeping pace. It’s a very dexterous track that throws itself around and changes up the melody often, allowing Schrotz to test her vocal range in style.

No Gravity touches on a lighter sound with acoustic guitar forming the basic structure. Its country-tinged vibe is something akin to First Aid Kit, and the lack of vocals gives it a breath of fresh air amongst the other tracks.

Summertime sounds exactly like a track about summer should be – fast, loose and fun. The lyrics touch on coming of age themes and a rose-tinted look at the sunniest time of the year. Owing debts to late 90s rock, the tracks pulses on forwards with even gentle nods to Bon Jovi in structure and sound. Race To The End is edgier and darker in comparison, sounding like Queens of The Stone Age vs Black Sabbath with a bit of Pink Floyd thrown in for good measure – good company to be around. Guitarist Scott Loose is enjoying himself as he bends his guitar sound around the track to push it forward and fill in the atmosphere where necessary. It’s a pretty epic track and an album highlight.

Electric Ravens once again plays heavily on the bass, before everything comes to a fray in a crescendo of sound. The track switches between soft and heavy in equal measure, allowing the track to breath where necessary before letting off steam in a strong chorus. The record ends with the 6 minute long slow burner Feel The Rain, as singer Michelle Schrotz sings of regrets and headache:  “The rain falls steadily, it won’t go away, I have to live with my choices, I have to learn from my mistakes”. The track changes to a folk vibe about half way through which is an interesting choice, but somehow works. It’s a gutsy move for the final track, but shows the mindset of a band happy to try new things and see what happens.

the calm | the storm is an interestingly diverse record that bites when needed, but is also happy to lay back and rest on its laurels. Big guitar riffs lead into intrepid acoustic sections and vice versa, as the songs too and fro between the heavy and the forlorn. Singer Michelle Schrotz does well to coax hidden meanings and layers within the lyrics, with her vocals working overtime in places to keep up with the battling solos and riffs. She also knows when to just sit back and let the music play centre-stage. Brave have created a coherent and fun record in the calm | the storm, and the long wait for the release has been well worth waiting for.