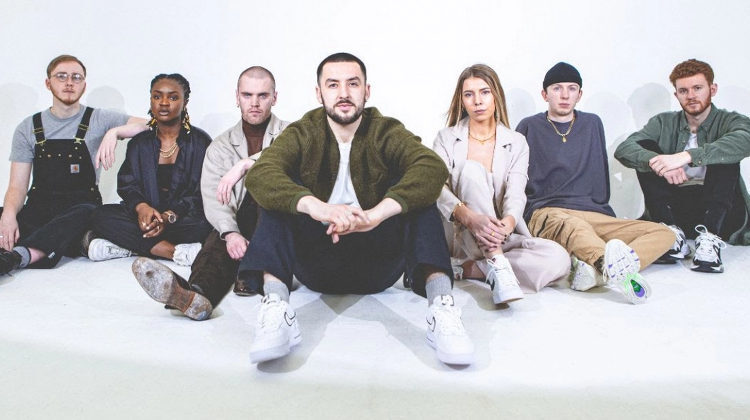 Project Hilts explore the space between grime and jazz on their debut EP, Still Here.

Jazz is making a comeback. Britain has always had a thriving underground jazz scene, but it’s been just that – underground. A fringe genre, pigeon-holed into ‘easy-listening’ or viewed as incomprehensible noise. But the last few years have seen it reassert itself with the rise of musicians such as Moses Boyd, Sons of Kemet, Alfa Mist, VC Pines and Tom Misch, mixing in hip hop, funk, rap, and electronica. This year even saw two jazz albums nominated for the Mercury Prize (Nubya Garcia’s Source, and Floating Points & Pharoah Sanders with the LSO’s record Promises).

Is it any wonder then that Project Hilts debut EP steers in the same direction? Inspired by Leeds’ vibrant jazz scene, as well as his history with Lewisham-based grime crew The Square, MC Hilts set out to create an eclectic, rhythmically complex record with the help of his 7-piece collective – and isn’t completely successful.

The instrumentation is solid. The title track, Still Here, lures you in with breezy brass sections, played by the group’s saxophonist, Aidan Newland, and trumpeter, Felix Burling, and keeps it up throughout. It’s reminiscent of speakeasies and smoke-filled, dimly lit lounge rooms; people draped across sofas, sharing cigarettes and sipping cocktails. But the imagery comes crashing down as the melody is suddenly juxtaposed with electronica and heavy hip hop beats. It’s a little all over the place but manages to work somehow and doesn’t fail to get you moving.

Lonely Days may be the gem of the EP – a track that feels like an ode to classic smooth jazz. It oozes style and soulfulness, mingled with elements of grime and garage, and later explodes in a crescendo of frenetic instrumentation that is a feast for the ears.

Liv Browning’s sultry alto vocals are given a chance to shine on the lead single, Dark Side. Commenting on the track, Browning said ‘Dark Side is all about that forbidden fruit kind-of romance. It describes the temptation of wanting to be with someone who you can’t have or know is bad for you, so the ‘dark side’ represents a place where you can explore those desires even though you know it’s wrong. The song aims to provoke the feeling of giving into temptation and basking in that guilty pleasure.’ The slinky sounds of the keys and brass, coupled with her stunning soulful expressions create those feelings of longing and sensuality. She should really have been given more mic time on the record.

But honestly, the rapping is where it all falls apart for me. And it’s a shame, as MC Hilts is featured on all four tracks – often the most. His flow requires some serious work, as does his lyricism. Take Pressure, for example – a stripped back, downtempo track in which he honestly speaks more than spits bars, and demonstrates the rhyming skills of a 5-year-old: ‘I wanna tour the world and be a jet setter / But that music’s soulless I ain’t a soul seller / I try and do it independent with my own cheddar / But British Gas have sent me yet again another letter’ (I literally laughed aloud at that one). The narrative, whilst honest, is trite and boring.

It’s a shame considering how much potential the collective has. They show real promise as a jazz fusion band, weaving and splicing genres together. But they can’t exactly ditch their frontman when he bears the name of the group.