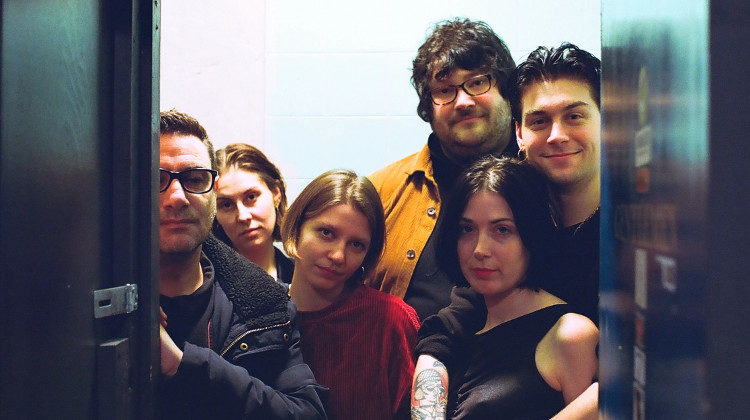 Vinyl Chapters speaks to Pet Shimmers about their new album Face Down in Meta, how they record as a band, and what we can expect from them going forward.

First off, congrats on the release of Face Down in Meta. As you already know, Vinyl Chapters reviewed it, loved it, and gave it a 5/5. As musicians, how happy are you with the way that the album turned out?

Firstly, thank you very much for the kind words and the generous taste rating. Although it’s true we are in the pursuit of imperfection as a feeling or aesthetic, everything on the record is intentional as part of our musical vision so in that respect, it’s perfect to us. There are no accidents.

How long did it take you to record Face Down In Meta? Tell us a little bit about the recording process.

It’s difficult to put any numbers on that really, it’s all a bit impressionistic. We didn’t make the record under any deadlines or anything like that. It was a peaceful and meandering process. We feel it’s important for us to capture energy and emotions at the moment they arrive so there may be a noticeable lack of sheeny purity around it but we’re happy to compromise in fidelity and perceivable quality for character and feeling. We’re not scared to show the process of recording in the sound.

Is there an overall message that you were trying to get across with this record?

No, the record is a celebration of our privilege to express our point of view, we be basic. As is with the nature of interpretability we’re far more interested in the message people individually derive from the music, not what we tell them to think and feel about it.

I would say we’re far more inspired by beauty outside of music than the achievements of musicians and bands. Music doesn’t have to be the primary informer of music, visual art, people, stories, places are far more influential on us. We have all shared entire lifetimes of music we’ve all listened to and loved, it’s a good guess that our music is a reflection of that.

The thing that I love most about playing shows is the catharsis you get when you show your vulnerability to the audience, it’s so neat when you see the people are really feeling what you’re doing, it’s very rewarding. I remember the show we played in Rotterdam, the venue was called Rotown, I really loved that place, think it used to be a Chinese restaurant. I remember the crowd being so attentive when we played and the staff were stupidly nice, even though it wasn’t too big, it had so many rooms and sections to the building, which was cool.

What is your vision for the band going forward?

Pet Shimmers To evolve and evoke.