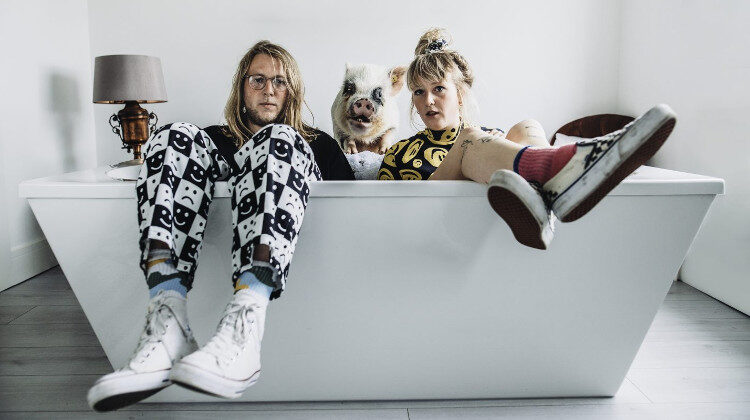 The Brighton-based brother and sister group, Penelope Isles (aka Jack and Lily Wolter), bring us beautifully atmospheric melodies, astute lyricism and lucent vocals with their latest project, Which Way to Happy.

The album’s concept feels very relatable, being born from the struggles of a millennial in today’s world, as well as the duo’s personal challenges over last year’s lockdown. The combination of the sibling’s psychedelic Indie, alt-rock style and meaningful song-writing creates a wonderfully dreamy listening experience, amplified all the more by the use of field recordings, hazy synths and sharp riffs. The ebbing and flowing of each song subtly captures the message behind the album… that life’s full of ups and downs, and it’s okay not to be okay.

When talking about the first track in a recent interview, Terrified, Jack explained “It’s about those days when you’re dying inside but have to pop out… having to put on a magic show, pretending to appear that everything is OK.” This is depicted through the song being, a feel-good guitar-strumming indie track on the surface, but, when you listen to the lyrics, you realise it’s the opposite. As well as the thoughtful concept, the hazy melody and atmospheric field recording which fades in at the end adds further depth to the song. Rocking at the bottom follows, opening up with hazy synths that are met by Lily’s beautifully fragile vocals. It’s another track that proves Jack and Lily’s effortless ability to nail intelligent song-writing, impressive technical production and dreamy melodies.

The shoo bop beat of Play It Cool has a hint of a Motown feel which works perfectly with the twinkling sound effects and sultry guitar riffs. The serene and expansive sound enhances the song’s daydreamy lyrics, as Lily muses “And I promise to be with you all day, If you want to show me where the clouds are.”

Whilst instrumentals on the first three tracks are led by guitar strings and synths, Iced Gems is more percussive but in a gentle, chiming way. The scattered arrangement also feels experimental and adds a quirkiness to the track. The following track, Sailing Still, tells of the demise of a relationship, portrayed by the weeping sounds of violin, cello alongside Lily’s gorgeous falsetto tones. It’s a song that creates a soundscape through its technical complexity, modestly holding an air of artistic prowess.

Miss Moon takes you along a different path as the album enters a celestial indie-pop wonderland, filled with choir-like harmonies and sci-fi strings and synths. Sudoku follows on nicely, mellowing the tone with a gentle acoustic number. Lily’s vocals are notably more pronounced and lower in pitch. This adds a rawness and emotion to the track, much like 11 11, a song that was impressively recorded in one take.

The experimentalism on this album is great, as you think it’s going down one route, but then steers off into a new direction. Have You Heard yet again demonstrates the duo’s creativity and technical skills as it lifts you up with its galactic, high-energy feel, whilst Pink Lemonade is crooning and contemplative. In a Cage completes the album, painting a heavenly soundscape featuring birdsong and soft instrumentals.

Which Way to Happy is an album that will take you on a ride of emotions. It encompasses intelligent, honest lyricism with sweltering melodies and adept variation, creating blissful moments in their music. A record for individual listening on a rainy day.