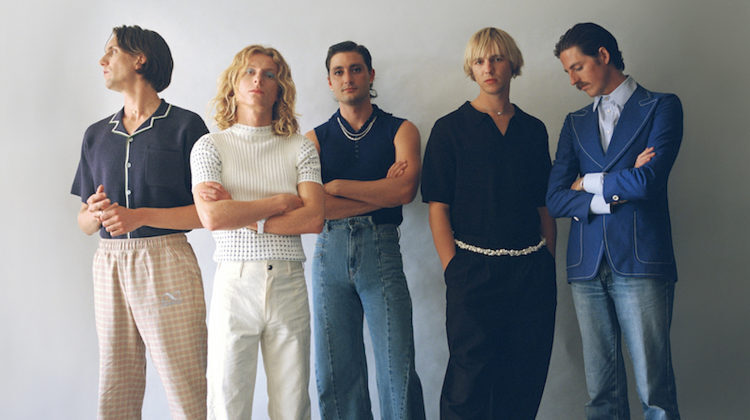 Berlin-based band Parcels may be a five-piece, but they move effortlessly as one on this album—an album that will get you moving, too.

Three years after the release of their first, self-titled studio album Parcels, the Australian-formed, Berlin-based five-piece present their latest album, Day/Night. At nineteen tracks, split into two sections (nine songs for Day and ten for Night), Day/Night pushes at the boundary between music and experience.

Their approach to sound is much the same: Day/Night sees Parcels crossing the boundaries of genre without straying too far from the classic disco-funk sound of their previous releases, whether it’s incorporating soul, jazz, pop, or electronic undertones. The album has a far greater diversity of sound compared to their 2018 studio album, Parcels; this is immediately obvious from the first track, LIGHT, which introduces us to the album with a sprawling string section arranged by Owen Pallett. This soon transitions into a pleasant funk instrumental that sets the tone for the rest of the album—as far as a tone can be set when it comes to Day/Night.

The album is ambitious and experimental, somehow managing to balance both of these qualities without falling flat. It brings forward the pre-release singles Free, Comingback, Theworstthing, Somethinggreater and SHADOW, and still has a lot to offer between and beyond them. Free and Comingback are propelled forwards by a bright, energetic ensemble of guitar, piano and drums, while Theworstthing, at track four, keeps the listener from getting too comfortable, flipping the switch on the sound of the previous two songs and drawing the listener in with a sultry bassline and matching guitar part. The low-key instrumentation draws attention to the song’s lyrics: “Here I am again / Waiting for a call / This time it ain’t coming / And I know I’m gonna walk / Back to her again”, which come across as even more striking following the lyrics of Free: “I feel this need / To be free”. This isn’t the only opposing theme the album presents us with—others include family vs independence, belonging vs isolation, the outer self vs the inner self, and of course, day vs night.

Car horns and low chatter permeate the cinematic strings which return for Day’s central track, Inthecity, where the string arrangement is superimposed over a soundscape of a city. Perhaps a homage to Daft Punk, who produced their single Overnight, Somethinggreater comes in two tracks later with a guitar riff that calls to mind the duo’s 2013 hit, Get Lucky. Daywalk’s downbeat, cheerful instrumental encapsulates the feeling of walking outside during the daytime, while the next track and Day’s last song, Outside, acts as a bridge between Day and Night, the solemn wind-down after a long day. Despite their attention-grabbing sound and diverse instrumentation, Parcels’ lyrics on this album are not to be ignored; their thoughtfulness and depth of emotion shows how much more there is to Parcels than meets the ear, particularly in songs like Outside, as well as Theworstthing, Reflex and Once.

Then begins Night. SHADOW is a mirror of LIGHT, but more chopped, with a more frantic string section in the middle. Neverloved is another downbeat track with a bass drum beat that sounds appropriately like a heartbeat, underneath the repeated lyrics “I never loved her”. Up next is Famous, an upbeat disco-funk hybrid that keeps things fresh. With Night, there’s no limit to when genres are switched up, or how many times—Famous features two abrupt breaks in style, transitioning into an infectious funk groove, before shifting again into a lounge-esque saxophone track. This unique way of playing with sound works in Parcels’ favour: even though the album lasts for over eighty minutes, it never really feels that long.

LordHenry has two shifts in tone and dynamic, which feel a lot like changing radio stations without the feedback in-between. Thefear has another two—a portion of the song is also played in reverse, followed by a crescendo of strings which climbs until it swallows up everything but the guitar riff, doing a good job of inspiring the titular fear in the listener. Reflex edges closer to ballad territory, while Inside feels more experimental, with cowbells and a warped bassline, which swells until it’s joined by an equally warped guitar line that sounds almost like a slowed surf-rock-type riff. The string section then returns to close the album, forming a perfect loop with the start of LIGHT, just as the end of a night fades into the start of the next day.

None of the tracks really stand out by themselves, but the nature of the album means it isn’t so bad that they don’t. Day/Night is a musical journey, an experience contained in about an hour and a half; the songs are a seamless set that wouldn’t feel the same if they were separated.

Overall, Day/Night is a tour de force of an album—normally it’s people who deliver parcels, but in this case, it’s Parcels who deliver.