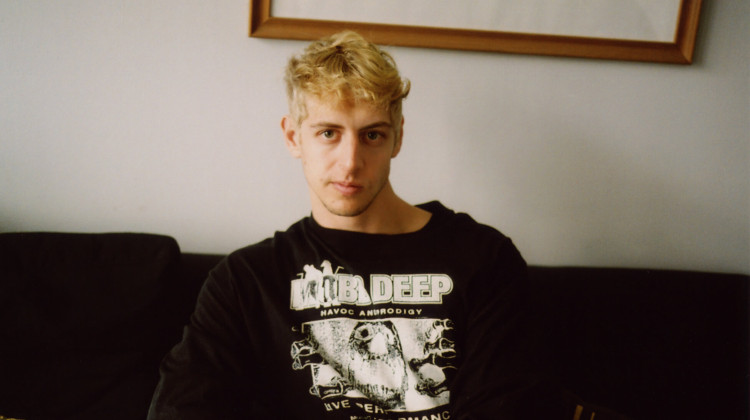 IDM producer Nathan Micay swerves away from the dancefloor and employs an arsenal of cello, viola, violin and distortion pedal for a politically charged record that embraces both filmic dimensions and a classically seasoned minimalism whilst delivering layers of emotional complexity.

Despite knocking out dancefloor-based releases for years under the alias of Bwana, the Toronto-born, Berlin-based producer and DJ Nathan Micay first sprang to wider prominence last year with his Blue Spring debut, a hauntologically inclined opus which grabbed and ran with 90’s rave tropes, Japanese manga concepts and dub-house and trance textures.

His latest offering, The World I’m Going To Hell For, presents a stark departure from his previous output in style and scope; though nominally rooted in electronica it’s smeared with strings and fashioned with a hushed, serene and cloistered contemplation in mind that suggests a close affinity with film scores. There’s emphatically no grind and blast; here this is replaced by the more emotive, less abrasive corners of instrumental bass music.

Spread generously across thirteen tracks and employing a discreet armoury of cello, viola, violin and distortion pedal within bare-bones percussion tracks, The World I’m Going To Hell For directly confronts our current socio-political moment. It’s geared as a corrective to “outdated rhetoric spoken by outdated humans in power” whilst gesturing at faith and optimism rather than fatalistic retreat.

Opening track, Tuning The Strings, builds tension with some Burial-like crackle, static and hiss, shot through with piercing strings and haunted voices. This leads into the hypnotic Who Shaves The Barber, where low strings summon a folksy phrase as a gleaming Krautrock synth shimmer propels the track into a shifting trance of euphoric proportions. Mournful moments of cinematic, quasi-classical grandeur create exhilarating meditations to float away on, from the graceful quietude of Natey Get On Your Horse to the velvety charm of For The Hawk Of The Millennium Empire. The latter proceeds with slim, quivering ingredients of birdsong, piano and cello before a trap-like beat and metallic timbres accentuate the slow-motion whirr; this gorgeous Arcadian reverie resembles a pastoral, music-box Aphex Twin in its mercurial, spangly cadences and spine-tingling chimes.

Micay’s album is not entirely bereft of queasy bleeps, murky bass rumbles and slippery beats, witness the juddering progressive house of Panz (projections of Pantha Du Prince and FourTet here) and the palpitating, elastic spasm of distorted, snapping breaks on And Relief Washes Over Me In An Awesome Wave. These pieces of crunching clatter sit unobtrusively, and even flourish, within a project that continually restates the primacy of minor-key melody and yearning elegance and never lapses into wholesale ambient mood music.

Taken as a cohesive whole, The World I’m Going To Hell For provides shelter from the encroaching madness of the world, as it seeks to decipher and make sense of its mystery; Micay’s patient, wistful compositions encapsulate a sonic caress.