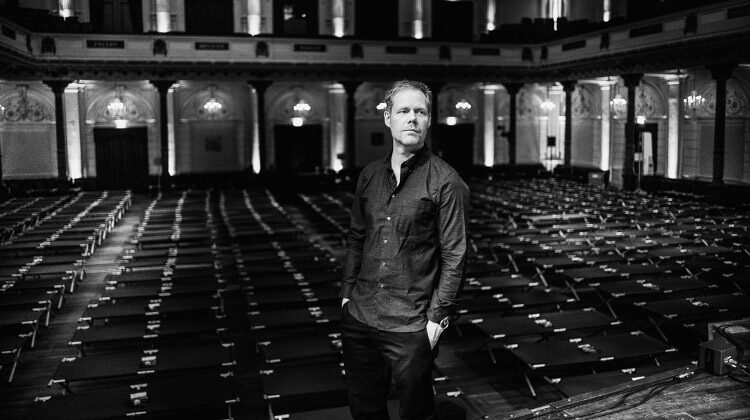 A decade in the making, the prolific composer’s timely new project draws upon readings of the Universal Declaration of Human Rights and snippets of global found sound to fashion an absorbing and heartfelt soundscape steeped in a profound humanity.

Max Richter, the million-selling poster boy for post-minimalism, is well versed in lacing socio-political commentary into his serene and stirring electronic-classical hybrid style. From his audacious 2002 debut, Memoryhouse, which referenced the wars in the Balkans, through to his Kafka-infused meditations on the Iraq conflict on 2004’s The Blue Notebooks and London’s 7/7 bombings on 2010’s Infra, the composer has never shirked from tackling compelling and urgent human concerns.

His handsome new project, Voices, written for an orchestra with radically reimagined instrumentation, directly addresses the subject of human rights, a theme which could not be more apposite given the startling recent rise of bigotry, persecution and authoritarian governments, the brutal murders of George Floyd and Breonna Taylor and a global pandemic which has exposed unrest and disconnect.

Opening with the somewhat stilted delivery of Eleanor Roosevelt reading the preamble to the UN’s 1948 Universal Declaration of Human Rights, the German-born British composer’s latest labour of love incorporates poignant readings of segments from the inspiring document, weaving the tones of If Beale Street Could Talk actress Kiki Layne and crowd-sourced recordings of children and adults of different nationalities in and out of Richter’s moody, plangent and hypnotic musical brew.

The achingly gorgeous first single, All Human Beings, sets the template with its gently vibrating strings and glassy choral gasps. Origins is succulent, foregrounding his somnolent piano playing against waves lapping at a beach; the gradual introduction of homely violins floating into focus provides an arresting sense of tension that doesn’t subside into resolution. On Little Requiems – Pt 2, Davidson shimmers weightlessly over an enticing web of strings.

The majestic and lucid Chorale ascends and soars with the mournful pathos of Barber’s Adagio For Strings, Arvo Part or Henryk Gorecki, whilst the placid keyboard elegance of Prelude tugs at the heartstrings like a throwback to Written On The Sky.

Since his emergence, Richter’s cultivation of a pop sensibility within the framework of classically inclined music has become more commonplace in alternative hipster circles, but he is still a unique presence in his treatment of instruments, production and mixing techniques. Taken as a whole, Richter’s sprawling opus strives to imagine a galvanised world of more positivity and a renewed sense of a global empathy; his inspiring, potent and immersive music engages the mind and the heart with its circling phrases, chamber ensemble aesthetic and sobbing strings.