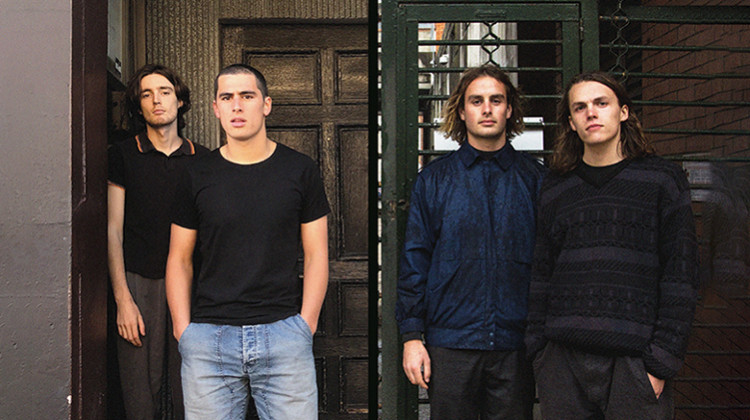 Marlin’s Dreaming have come up with a unique title for their latest album Quotidian. Meaning ‘mundane’, the record sees the band tapping into a psychedelic influence, skillfully blending it with surrealism straight out of Salvador Dail’s diary with the odd hint of Surf Rock.

The record is a bizarre and heady combination but somehow they manage to make it work. I’m reminded of many artists with the vibe of this LP. Echo and the Bunnymen, Gary Numan and Cocteau Twins.

The track Sink Or Swim has an impact of haunting the psyche. In the video for this single release, Semisi Maiai seems to be channelling Oscar Wilde’s The Picture of Dorian Gray in both looks and attitude. There is a ‘homemade’ feel to the video and an innate naturalness to the conception of this song and its playful eighties feel.

On another note, did Marlin’s Dreaming have a crystal ball when they wrote some of these tracks? Cabbage Tree states: “I’ve been stuck inside for a while now”. The song Filling in Time is a stand out track for this album and extraordinary in the accuracy of the prediction of the lockdown: “This is how we die slowly, Suffocating hiding stuck inside like this.” Well, it sums up how a lot of people might be feeling and it has a nice dreamy ‘Coldplay’ feel to it.

“I wanted to personify two different characters,” Maiai explains. “The bleating high pitched character, and the dark, arrogant character. Both characters are people in my life that… I guess piss me off enough that one day I decided to write about them; or should I say write for them.”

A lot of people in my experience have two personalities. Is the lead singer letting us in on a deeper meaning than he cares to acknowledge? It seems to me that the dark side of Marlin’s Dreaming is very dark at times. There is, however, poetry and symmetry to their music that is compelling and engaging. Alike is a funky and gritty track: “He’s lost his mask and he’s on the run”, which again suggests this album could almost be a record written specifically for the pandemic. Moth Eyes is an intriguing piece with a strange hint of David Bowie and another stand out track. The whole album is persistently eerie in its tone and its feeling of ultimate foretelling of the year ahead.

Quotidian is a cool and classy indie album that swallows you whole and takes you down the rabbit hole into Wonderland.