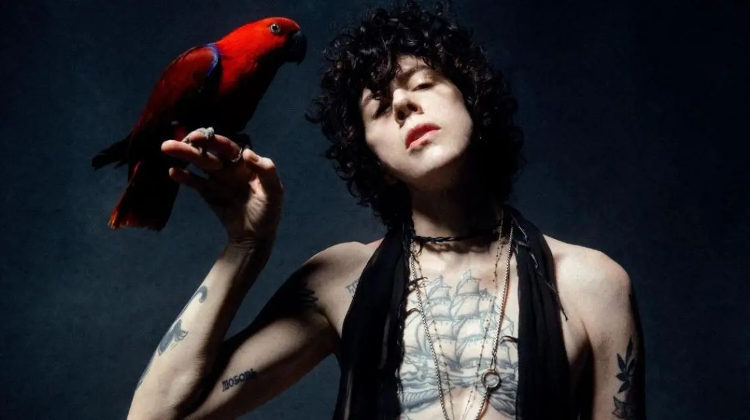 LP proudly wears her heart on her sleeve in her powerful new album, Churches.

Depending on what mood you’re in, LP’s new record Churches is either a gift from the music gods themselves or simply a collection of overly dramatic tracks with passionate vocal lines and voice breaks galore. LP describes herself as ‘a bloodletter of emotion’ – and she is quite right in the sense that her music is full of feeling in some of the rawest forms.

‘I’m like a singing fucking banshee,’ she continues, ‘my music errs on the histrionic side, but that’s how I feel, you know, I try to just let it seep out because it just hurts me if I don’t.’

‘Banshee’ is certainly one way to describe it, but whilst LP’s vocals are certainly very emotive and theatrical, I would also say they are of a far nicer quality than a banshee’s wailing could ever be. That being said, I confess I’m not the biggest fan of her overall vocal style in that to me it occasionally sounds quite blocked up and the frequent, deliberate voice cracks at the end of every other phrase are a little overkill in places, but I’ll put that down to personal preference.

Moreover, LP’s feelings don’t seep out in this album – they pour forth as she really does not hold back.

A good example of her vocal acrobatics is in the track The One That You Love. LP has superb control over her voice in this one; the way in which she effortlessly jumps between large intervals and lands on a note perfectly, not to mention the way she swiftly goes from delicate head voice to full-on belting in the chorus is remarkable.

Rainbow is another highlight – the stripped-back, more subdued nature of this track allows us to hear a more vulnerable side of LP through her delicate vocals accompanied by a mellow acoustic guitar. The runs when she sings the word ‘rainbow’ are also particularly satisfying – yet another example of her incredible vocal control.

Unfortunately, the record ends on such a cheesy note it’s almost cringe-inducing with the track Poem, which is exactly what you’d expect it to be from the title. Now, I completely get that this is subjective, but there’s something about spoken word poetry combined with overly soppy, emotive language that just doesn’t do it for me: ‘You’re my angel at the end of the rainbow.’ Pass me a bucket.

On the whole, however, Churches is an impactful album, even if it is not without its faults. There’s no denying that LP provides us with a real range of songs that completely show her off in many ways, and that is to be commended.