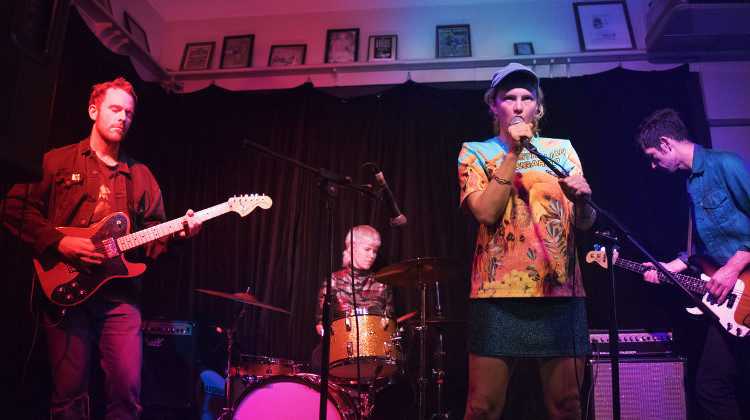 New Aussie band Loose Fit have just released their debut self-titled EP. Reflecting their passion for experimental and punk music, the recurring bass grooves will be so ingrained in your mind they may even narrate your nightmares.

Starting with engaging riffs, we experience a little disappointment whilst each song eventually ends up following the same pattern. The occasional uniqueness that shines through makes this EP radiate a different energy, but apart from the kick drum adding a new texture in Reflux, this doesn’t happen often enough.

Pull The Lever kicks off the album by showing exactly what to expect from the other song; a dark atmosphere, rhythm-heavy tracks and minimal evidence of exciting and energetic lyrics. Maybe some more creative production could have lifted this all a little bit more. Despite this, there is something to be said about the expressive tone of Anna Langdon’s voice, illustrating her pain and portraying the gloomy areas of her mind, even the ad-libs in Black Water spark a story in the imagination of the listener.

It’s obvious that the professional playing of these instruments is at an incredibly high standard and that each member of this band is extremely talented. However, the saxophone squeaks in Black Water sound like someone’s nails are being dragged down a chalkboard and although it is clearly showing their experimental passions, it may not be everyone’s cup of tea.

I think you have to be invested in this type of music to truly appreciate its beauty, although I can appreciate that the spoken sections in Riot are cool and add something new to their style. Visiting their title with the hectic aura in the song, the repeated lyric “There’s a riot at my doorstep” radiates Anna’s fear to the listener and isolates their attention directly towards the meaning of the song.

The final track on their EP titled Delete is probably my favourite on the album. The minimal yet sassy know-it-all lyrics are nicely complemented by the hi-hats and cheeky saxophone parts. The song sounds like it has had a lot of structural attention and therefore made the track engaging and easy to listen to. The build-up of instruments was cleverly completed and all parts are there to support each other rather than fight against each other. It just works!

Loose Fit have added some nice touches in this album, and it is obvious a lot of thought has gone into it. However, a debut EP should be something that makes you shine and although they have done something new to make them seem interesting and stand out, I don’t know if this is going to make them a worldwide success.