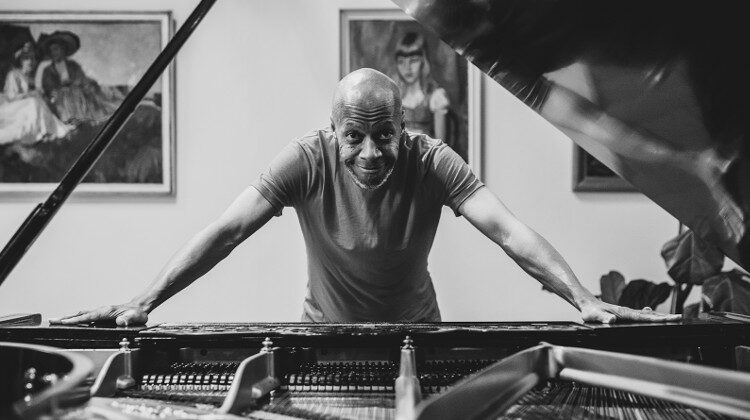 Challenging but rewarding is the sound world of Laraaji and new album Sun Piano, emitting impressive transcendence and radiance requiring clarity of mind.

Laraaji returns to his first instrument on his latest album Sun Piano, consisting of 12 spiritual keyboard improvisations that were performed and recorded in Brooklyn Church. This album offers a holistic, ambient listening experience that is an acquired taste, but makes for fascinating listening nevertheless.

From the opening track, Embracing This, the ‘sun’ from the title is evident through the radiant, resonant circular G major melody and the heavy use of the sustain pedal adding a watery effect to this sunshine. Throughout the album, resonance and expansiveness of sound are ever present, as the beautiful church acoustics allow for a listening experience in which the sound of the piano can wash over you; creating a dome of sound that simultaneously occupies a sense of fluid movement and still pensiveness. Laraaji creates these remarkable effects through emphasising the space between chords by allowing them to resonate, as well as by combining low and high tessituras; which is especially effective in Elevation, through the rich and full low bass pedal notes towards the end of the track.

Contrasting this, Laraaji also creates a sense of profound intimacy through sparse production, by not eradicating the more ‘human’ details in the recording (the squeak of the piano stool, the crispness of the articulation, the church’s acoustics). This means that moments of transcendent beauty, such as the opening of Temple of New Light, become even more powerful and allow the use of tonal colours and space to shine through.

One difficulty in listening to this album in one sitting is that it enters a lull of C major in the middle that has little direction, dwelling for slightly longer than is comfortable; especially in This Too Shall Pass, which felt overwhelmingly directionless at times. This may be due to its improvisational composition methodology, but at times the indulgence was a little too potent to be profound. It’s possible that tracks like Shenandoah might have been more enjoyable if it were in a different key… Furthermore, while the raw production allows for an intimate tone, it also rendered the crisp articulation as an unwelcome and jagged in some passages– like a percussive intrusion into this fluid bubble of sound.

While this release requires a clarity of mind and openness to be enjoyed fully, once this has been acquired it is an enjoyable experience. One might require multiple listenings to fully appreciate the subtleties and nuances of this ambient sound world, and more brightening tonal colours wouldn’t go amiss. Despite this, it is an enjoyable and unique experience that reveals a new side to Laraaji’s extensive artistry.