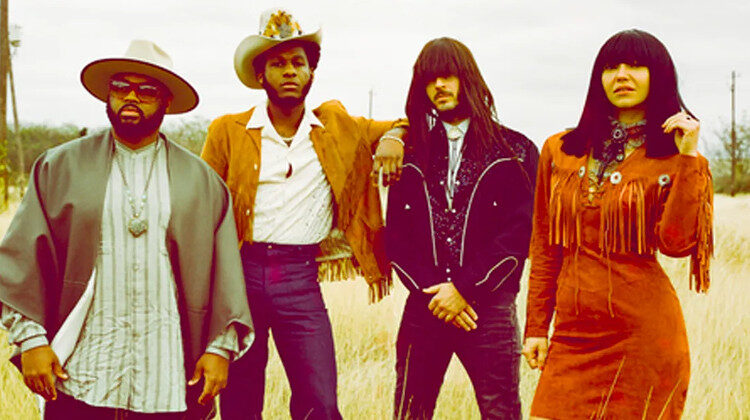 Khruangbin glide into 2022 with an easy-listening evening-time EP

Two years after the release of their upbeat, chilled-out EP Texas Sun, Texas-based trio Khruangbin return with its sequel, Texas Moon. The five-track EP sees the flourishing of a more funk-focused sound from a band whose genre has defied labelling in the past, having been categorised by critics as everything from rock, to psychedelic, to electronica.

The album, again featuring American soul singer Leon Bridges, opens with Doris—a low-key ode that sets his sleek vocals over wobbling wah-pedalled guitar and steady drums. B-Side, a swooning funk track, follows on, throwing in a catchy chorus for good measure (“You may not be everywhere I go / Get back / But you stay on my mind wherever I go / Like that”). The band’s instrumentation doesn’t fall into the background, instead holding its own in the spaces behind and between Bridges’ vocals. However, it starts to feel a bit repetitive around the third of its four-and-a-half-minute duration, especially when you notice its lack of lyrical variation. It seems like the kind of track a DJ could make a killer remix out of during a set, but which doesn’t capture and hold much interest on its own.

Chocolate Hills marks the middle of the EP, and another meandering, romantic track which doesn’t stray too far from the others. Father Father is notable for its religious lyrics, a subtle reminder of the band’s beginnings (vocalist/bassist Laura Lee and vocalist/guitarist Mark Speer first met in 2004, while playing in the same gospel band). Then returns the romance with Mariella; its lyrics are charming (“Hair pitch black like the midnight sky / Eyes like the jungle, you’re something wild / Her sweet melody sings wherever l go / Running through my mind, sitting in this road,”), but the only things that really separate it from Doris and Chocolate Hills are its vague surf-slash-indie rock undertones.

As an EP, Texas Moon is pleasant, easy listening. It’s full of tenderness, and smooth enough that everything just glides off it—though had it been more than five tracks, that would include the listener’s attention.