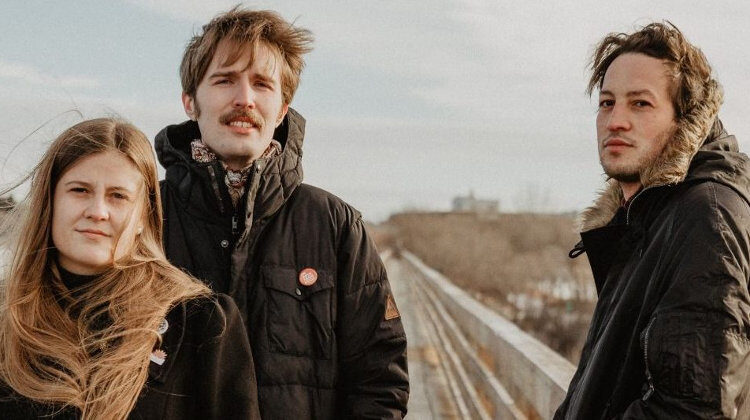 Two Canadians and a Kiwi summon joy from sad-eyed introspection on a rootsy and heartfelt Americana classic in the making with Plastic Bouquet.

The advent of the internet has made our world smaller in a plethora of ways, most notably when it comes to the availability of, and access to, a dizzying range of music. It has also been a boon to the spirit of artistic collaboration, with geography proving no boundary to the intuitive interplay generated between kindred spirits.

Fired by fortuitously discovering the folk, country and polka-infused sound of Canadian duo Kacy & Clayton on Spotify whilst touring in 2017, the acclaimed Kiwi singer-songwriter Marlon Williams messaged the roots-music second cousins and ignited a friendship which has blossomed into Plastic Bouquet, a rustic and bruised record steeped in an old-timey grace that evokes a certain American diner-inflected, Twin Peaks-like hypnagogia.

Raised in the Wood Mountain Uplands, Kacy Lee Anderson and Clayton Linthicum have carved a gilded reputation on the Saskatchewan music scene for seamlessly drawing upon timeless North American folk traditions and purveying a story-song Americana equally indebted to Nashville country and Laurel Canyon folk. Their Jeff Tweedy-produced effort, The Siren’s Song, represented a significant breakthrough in 2017, transcending their trad roots with a modern psych panache that joined the dots between old and new. Meanwhile, Williams has built a loyal fan base through support slots for the likes of Lorde and Bruce Springsteen and his cultivation of a pining lyricism and a twangy, 1950’s torch song aesthetic.

Plastic Bouquet is a cross-hemisphere alliance between performers operating at the peak of their powers, pivoting around shared sensibilities and a mutual love of studio craftmanship that’s neither reductive or synthetic; these guys tug at the heartstrings with a genuine pathos and an emotional charge that separates doyens from dilettantes.

Cut predominantly in Saskatoon with the Canadians’ touring rhythm section of drummer Mike Silverman and bassist Andy Beisel, Plastic Bouquet serves up lives gone wrong, roads not taken and people backed into dark corners. Anderson and Williams take charge of vocals, whilst Linthicum sticks manfully to acoustic, electric and pedal steel guitars, organ, piano and keyboards. There is a delightful contrast to behold in Anderson and Williams’ Nancy and Lee-style sparring, with the male voice carrying the honeyed tones. Anderson frequently invokes Sandy Denny and Joni Mitchell in the unpolluted phrasing and languid delivery of her affecting vibrato, whilst there is a certain echo of Roy Orbison, Townes Van Zandt or Richard Hawley in his mournful, velvety croon.

On Your Mind’s Walking Out, Anderson and Williams conspire to cajole an angelic fragility from shards of deep melancholy. “Time is on your side, though you’re looking like you’re barely alive,” she intones with a matter-of-fact steeliness, as Williams’ harmony slides in with a lithe whisper. The title song, a deceptively jaunty tale of lives lost to highway accidents, proves both tantalising and compelling as a murder ballad of Gothic bleakness and out-of-time poetry.

The Flying Burrito Brothers-inflected Isn’t It, described by Kacy as a “tale of fear, lust and a lack of self-possession”, demonstrates Anderson’s easy air of self-assurance and Linthicum’s pedal steel breathes sensuous, prayer-like ripples into I Wonder Why, one of numerous tunes here that reek of a meditative air of eyewitness. The sure-footed and poignant finale, Devil’s Daughter, sees Williams and Anderson trading barbs over acoustic guitar, spartan percussion and bass to stirring effect.