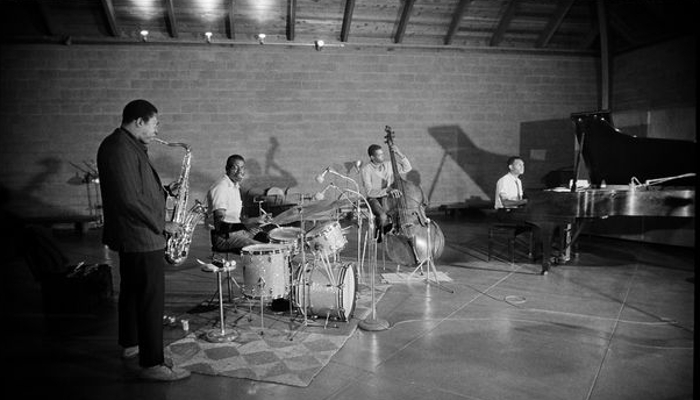 The legendary Impulse label excavate a long-lost gem from the vanguard of 1960’s jazz; the John Coltrane Quartet let loose on a richly emotional and lyrical set of familiar tunes some six months before diving into the monumental summation that was A Love Supreme.

The latest in a seemingly endless flow of lost-and-found recording sessions from jazz’s gleaming back catalogue, The John Coltrane Quartet’s Blue World has been dug up from 1964,  – just before its author dived into the shape-shifting, genre-defining A Love Supreme – having been initially slated to score an improvised French-Canadian movie, Le Chat dans le Sac. Fragments were included on the original soundtrack, but Impulse have now stitched the material together for a full release and it’s engrossing, pivotal and mesmerising.

The incomparable quartet – leader Coltrane, pianist McCoy Tyner, bassist Jimmy Garrison and drummer Elvin Jones – were bang in the middle of a creative surge in 1964, having recently completed some of their finest work on the sumptuous Crescent, and were willing to oblige Quebec film director Gilles Groulx with choice cuts of well-known and previously heard tunes. 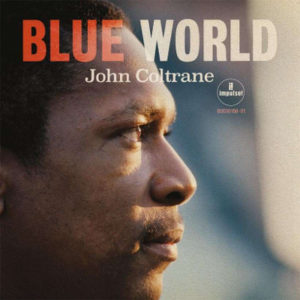 Recorded at Rudy Van Gelder’s studio, New Jersey, in June of that year, Blue World offers a retrospective cache of songs culled from earlier phases in the saxophonist’s career, re-moulded and re-fashioned by a smouldering and evolving band who shift freely from frenetic intensity to brooding wistfulness. The sessions yield an abundance of treasure that’s significantly more than filling in time before the next major enterprise: the quartet revel in the polyrhythmic patterns and sensuous yearning that distinguished their most epochal recordings. There’s a palpable sense of fluidity and assurance in everyone’s precise, devotional playing: this modal, flowing jazz is inventive yet accessible, tender and compelling.

It’s a genuine thrill to hear the famous quartet exploring harmonics and space: Jones’s brushwork is elegant and feather-light, Tyner’s piano runs are tactile, pungent and irresistibly melodic, Garrison’s bass is supple and unobtrusive, while Coltrane’s rousing, impassioned and earthy phrasing soars and swoops around the gentle mountain stream surrounding him.

From the three takes on the hook-laden Village Blues and the two versions of Coltrane’s classic ballad, Naima, to the stupendous title track (a new, stripped-down interpretation of Out of This World), Blue World luxuriates in a tantalising middle ground between a genius’s songbook-heavy early moments and the ecstatic explorations of his force of nature late period.