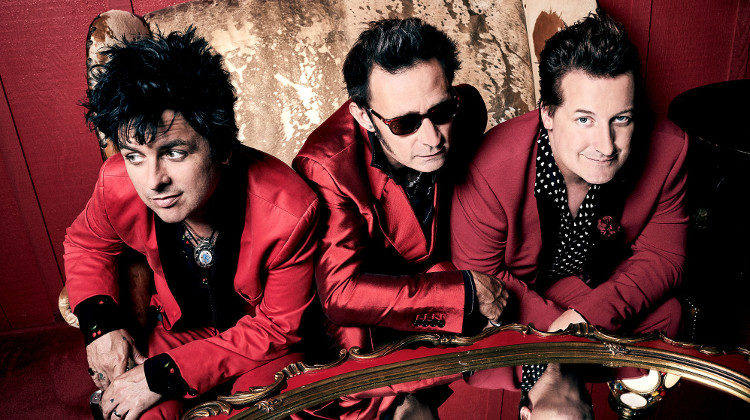 Green Day are a shadow of their former selves on Father of All… as they try to recapture the anarchic, teenage spirit of their youth.

There’s not a lot of variance on Father of All…, the goofy, expletive-ridden new album from everybody’s favourite Californian punk trio. Every song sounds like the White Stripes or the Black Keys; garage, glam, falsetto. Now nearing their 50s it sounds like the band no longer takes inspiration from smoking weed and punk music, but from whatever’s playing in the latest Kia Sorento ad. The only evidence of substance abuse here is the copious amount of fumes inhaled during the band’s collective hair-dying sessions.

Meet Me on The Roof is the only song I like on this album. It’s got a fun falsetto chorus and sticks in the mind. You wouldn’t have guessed its Green Day, and that’s okay! Tinkling, prom-night pianos give it the feel of a Panic! At the Disco song. But none of these songs could hold a candle to Green Day classics in a live scenario. The only crowds these songs could enliven are those gathered in support at a Pete Buttigieg rally.

Billie Joe Armstrong is too old for rhetorical questions, let alone ones that ask “who’s holding the drugs?”, let alone ones that are followed by the refrain “I was a teenage teenager / full of piss and vinegar.” What kind of audience is this aimed at? The entire song is a bizarre and freakish idea that should never have gotten outside of the fairy-light lit rehearsal room. Next is Fire, Ready, Aim, an even more baffling prospect. Perhaps the overlap between fans of Fall Out Boy and the National Rifle Association is greater than I imagined, but it leaves me feeling cold and empty inside.

Lots of these songs are reminiscent of their past efforts. They are the reanimated ghosts of Green Days past. The aforementioned I Was a Teenage Teenager is a key example. Sugar Youth’s chorus vocal, while catchy, is a carbon copy of She’s A Rebel off of American Idiot. Stab You In The Heart, meanwhile, is a bluesy jam that must have made for a lively practice session! But it’s utterly impotent; it couldn’t prompt an American ‘cop’ to violence.

All aspects of the album suffer from the hopeless quest to unearth some Elixir of Life and is embarrassing in its commerciality. It’s all there on the cover: an ‘irreverent’ reprisal of American Idiot’s heart-hand grenade motif next to a daft CBeebies Unicorn mascot. And the title, which works on the assumption that swear-words possess a mystical, rebellious power, read like so many self-help books on the shelves of WHSmiths: How Not to Give a Sh*t, Fu*k It Who Cares?, The Art of Not Giving a Fu*k. It was as if the album was named with the sole intention of impressing an admiring nephew. Grandfather of All Motherfuckers, more like. The myth of Pure Rock proves elusive.

Father of All… is a disastrous failure to capture the rebellious Rock Ideal that is espoused on Green Day’s recently controversial billboard display, which markets the album as drugs, graffiti and “100% pure uncut rock,” in opposition to “trap beats.” If this is what induces a race war in America, it will have hardly been worth it. The failure is overwhelming apparent on Oh Yeah, which sounds like Imagine Dragons doing a Butlins advert, evoking an image of ‘Cool Family Fun’: zip-wires, water slides, nice dinners.

Worst of all is Junkies On A High, which is not only ludicrous but offensive too. Nothing signals ‘back to roots’ Rock-and-Roll like a Junkie who is on a high, eh? The lyrics are utter nonsense: “Rock and Roll Tragedy / I think the next one could be me / Heaven’s my rival.” The epic modern rock icon bellows that he wants to “watch the world burn!” Newsflash, bellend! The world is burning, a far greater reality than your “Rock and Roll Tragedy.” The pseudo-anarchist schtick was embarrassing when you were 17, but now you’re grown. Really, it sounds like Billie Joe Armstrong composed this album on breaks from playing PS1 in his Beverly Hills mansion. Lounging in his pants and Iron Maiden t-shirt. Does Armstrong have any idea what 4 degrees of warming would mean!?

Who are Green Day? Are they the rock-dramatists of American Idiot or the stoned California punks of Dookie. The band return to the scenes of these sonic reference points to find empty barren wastelands, Boulevards of Broken Dreams. Green Day’s 13th studio album is a serious identity crisis which proves the old-adage incorrect, its unlucky not just for some, but for all who may listen to it. The frontman recently declared Green Day were avoiding politics on this album, as it is “too obvious,” instead deciding to blindside us with a snivelling, Oedipal regression. Well, this is the low-water mark from which cultural value should henceforth be based: inauthentic, ‘apolitical’, corporate pop-punk.