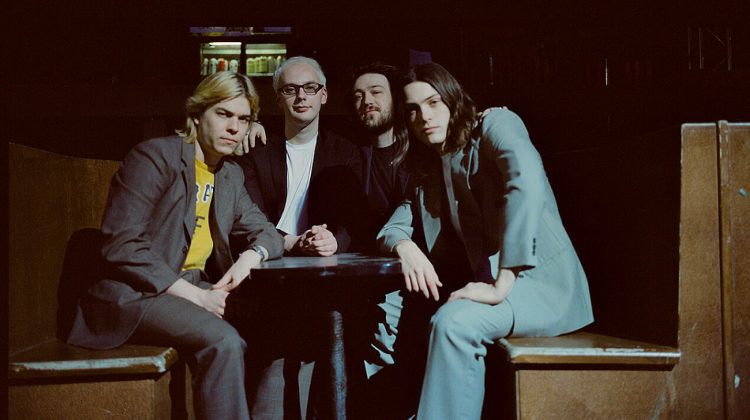 It’s no surprise to hear that Goodbye Honolulu have been playing together since they met at high school, honing their skills in clubs and bars across Canada and the US. Their cohesive sound is full of energy, blurring the lines between rock and pop and drawing influences from a number of genres. The album was recorded in an abandoned movie theatre-turned recording studio in the east end of Toronto, which inspired many themes of the album.

The record starts with Cut Off. A hard-hitting bassline, piercing guitar and punchy drums combine with guitarist and frontman Emmett Webb’s striking vocals to create captivating high-energy rock, offering a taste of what’s to come. U Got It follows, more of an indie vibe with all the ingredients of a great track. Strong bass and guitar build up to a catchy chorus, and the wild screams and chants at the end of the track encapsulate their raucous style.

You and Me follows in similar fashion, this time bassist Jacob Switzer provides the vocals. The band don’t have one frontman, and instead share the duty, each singer adding their own style and swagger. Vocals aren’t the only thing that are collaborated on; the band switch instruments and all pitch in with the songwriting. This adds a refreshing diversity and keeps each track fresh.

As the album moves on, the group showcases their ability to nail different genres, from the folk-driven Leave Your Love Behind, to the more classic rock numbers Get the Denim and Dye My Hair. The latter is a particular highlight, head percussionist Max Bornstein laying down thumping drums which pair perfectly with hazy electric guitar. The band really knows how to write a chorus, and this one delivers again.

The second half of the record is where Goodbye Honolulu really come into their own though, and Over and Over is the standout track. Strong 70’s disco vibes the undercurrent in a funky mashup of instruments, paired perfectly with Fox Martindale’s smooth vocals, creating chilled-out summer vibes. The lyrics match perfectly, painting the tale of the daily repetitiveness of a monogamous relationship. A different feel to the rest of album, but a fine example of its genre traversing nature. An instant hit and one I’ll be playing over and over.

Emmett Webb returns to the mic in Shine, another laid-back, slower track. Inviting synths join fuzzy electric guitar and bongos to form another charming piece.  The album finishes with a plethora of pleasing tracks, from the high-octane How Are You Doing to the equally absorbing Stray Dog, Goodbye Honolulu keeps on giving until the very end. Make You Mine is the fitting finish to the album, a stripped-back emotional piece showing yet another side to the talented group.

Goodbye Honolulu is an impressive album, each track offers something different from the last, and the sound is unique and fresh. It’s no wonder the group are starting to turn heads. They have all the makings to be a big name and are definitely one to keep an eye on. A fun ride of a record and a stellar collection of vibrant tracks, with a few real standouts which make it a worthwhile listen.