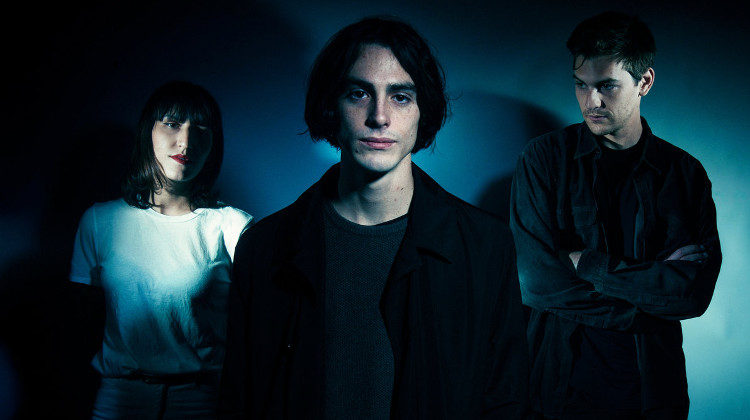 Throughout their debut album Social Crutch (great name by the way), Gold Cage do a great job at making disappointment sound really *big*. The tambourines sound as close and large as their bursts of guitar. The lyrics are bleak, the melodies are pessimistic, the tempos are slow and the arrangements are minimal. The male and female voices bump into each other like awkward meetings in hallways. Drums start the songs, creating great empty spaces in need of filling. The guitars fill them full of depressed melodies. The bass is left to moon along at the back of the pack. This is slowcore-inspired American indie by numbers, and it’ll suit the mood of a University dorm perfectly after Cigarettes After Sex have faded out.

The best songs on the album utilise reversing guitar loops, which brilliantly capture the repetitive, reflective nature of the genre Gold Cage inhabit. On Shadows for instance, the central guitar riff recycles throughout the song like a hip-hop record scratch. This effect sweeps the listener along with it on the effective lead-single Repeater Kember which builds on a wistful, decaying guitar loop and percussion so slow as to have barely produced a sound. Here we are treated to a combo as good as pizza and crying over ex-girlfriends: maracas, missed opportunities, memento mori.

A crucial element of Gold Cage’s music is the vocals. As we all know, the most fitting sound of suburban boredom lies in the dynamic interplay of laconic male and female voices (see: the XX, My Bloody Valentine, Beach House, Philip Schofield and Holly Willoughby). There is a strong emo trend on Social Crutch, and the voices, which seem to have been whispered through cracks in the walls, compliment this. On these tracks, an emotion of distraction and boredom builds, as it so often does for suburban American indie-rock, to a disconsolate climax of emotion.

The band’s sleepiness, however, becomes slightly less interesting at full album length. Gold Cage don’t have the tonal innovation of the shoegazers to maintain interest over 60 minutes. For a slow-core effort, the lyrics are also slightly lacking. You’re supposed to plum the absolute depths of pitiful sadness (à la Red House Painters), something like “two beeps, I pressed my microwave’s button twice / You could never be that nice,” instead we get “you know I’m there / I’ll always be there / You know I’ll be there” as on Harshmallow. In fairness, staying true to their precursors, the delivery is mumbled so you can’t really decipher the words. One should not be afraid, when writing a song of the genre ‘slowcore’, of being boring. In fact, one should embrace the efforts to bore one’s own socks off, watch said socks dance around the room and then fall asleep from the sheer boredom of the spectacle. Perhaps their persistence will pay off for some.

If you’re looking for an album that evokes rainy days scrolling through tumblr – staring numbly at pictures of white girls in oversized t-shirts with blood on their lips and fag ends in discarded pizza boxes on the grimy carpet floor – this is the album for you. Like classic slowcore tinged albums of yesteryear (Slowdive’s Souvlaki), the dreary repetition of these tracks synthesises the experience of being locked in a public toilet for hours, wearily beating at the door. It’s comforting and cathartic to get these feelings out, before one comes to realise that all a long fringe does is get it in the way.