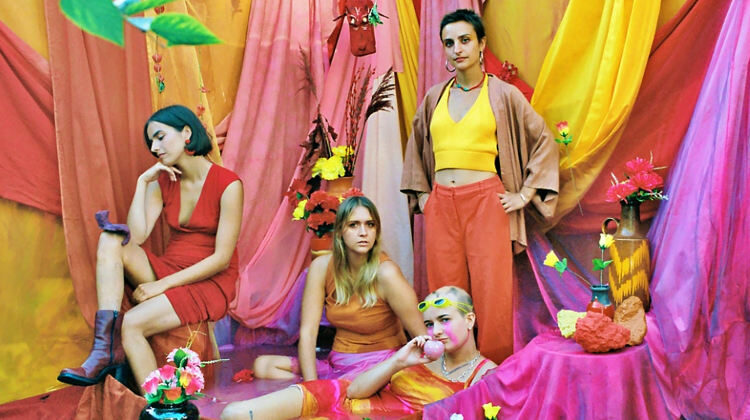 Goat Girl have demonstrated their musical maturity with their sophomore album, On All Fours.

Full of grungy, post-punk soundscapes, On All Fours is an interesting record to say the least. Musically, it feels both nostalgic and refreshing at the same time, as though you’ve heard some of the material before but with enough new content to keep you interested.

However, whilst it is claimed that the south London band ‘[wear] their political leanings on their sleeves’, the lyrical content occasionally proves to be a little too generic and open to interpretation for it to truly pack a politically-charged punch.

Many of the tracks on the album showcase Goat Girl’s sophisticated musicianship skills considering the members’ tender ages, with silky, hypnotic harmonies and impressive use of electronica. Badibaba is one example of this, with a swirling vortex of vocals in the chorus, whilst Jazz (In the Supermarket) builds upon the layered harmonies throughout with a siren-like, droning guitar in the outro.

Similarly, the single Sad Cowboy is one of the highlights of the album, with a particularly effective contrast between the synthesisers and the Western-style guitar that begins halfway through.

However, whilst choruses and outros appear to be the band’s forte, the verses of many of the tracks appear a little on the bland side. Lyrics such as ‘Haven’t slept for weeks, I’ve been dazed / Haven’t slept when you’re in my headspace / Feel the burning on the skin / Feel the turning come from within’ seem largely generalised and border on unoriginal – apparently the song to which they belong, They Bite On You, is about so-called ‘capitalist parasites’, but you’d never know.

To the band’s credit, however, other songs are a little more explicit with their messages: The Crack addresses how people are ruining the planet, whilst Anxiety Feels clearly highlights the topic of mental health: ‘I don’t wanna be on those pills / Heard they make you numb.’

Whilst it’s not without its faults, On All Fours is, musically, fairly impressive. Despite the somewhat lacklustre lyrics and borderline repetitiveness in places, Goat Girl are to be commended for their use of instrumentation and innovative sound. If they continue in this vein then they may well produce some real musical excellence in the future, but I would personally like to see some lyrical development alongside it.