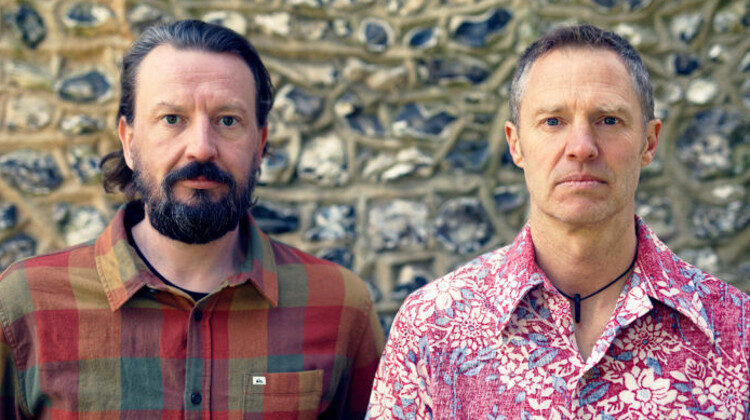 In which the Brighton duo dig deep and mine the rich seam of lavish soundtrack and library music from the 1960s and 1970s to thrillingly louche and arresting effect.

The Globeflower Masters Vol.1’is both a labour of love and a homage to a specific, gilded age of pop. Brighton musicians Glenn Fallows and Mark Treffel’s rapturous LP is an embodiment of a certain record-collector magpie spirit and zeal, vividly approximating the psychedelic splendour of classic sounds from yesteryear yet sounding acutely modern and even futuristic.

Both musicians have form in shaping rare grooves on wax: Mark’s CV includes stints with Blue States and The Soul Steppers whilst Glenn has worked with The Impellers and Andres y Xavi.

The Globeflower Masters emanated from Glenn’s ambition to use the fecund genre of soundtrack and library sounds from the halcyon days of the mid-1960s to the mid-1970s as an inspiration for his own electronic, retro-futurist project.

It started with him preparing the bare bones of musical sketches and sharing these drums, guitar and bass drafts with Mark for seasoning and extra heft. The end result is a polished, intelligent and expertly performed set of mini soundtracks that doff their cap to the genre-defying riches of Serge Gainsbourg and Jean-Claude Vannier’s work on Histoire de Melody Nelson as much as the seductive textures of David Axelrod’s epic psychedelia productions and the languorous end of mean-streets blaxploitation movie themes.

The assured Faith In Time sets the mood from the off with its prowling and spacious bass, loping spy-thriller funk, flares of violins and meandering guitar scuzz that sounds like it’s been copped from Axelrod’s Songs Of Innocence. Scene in Roma is similarly gorgeous, all warm strings, treacly bass and purring keyboards serving the melody without a hint of indulgence.

The melancholy How It Shimmers and Who Knows When summon echoes of those sumptuous instrumentals from Isaac Hayes scores of the 1970s, whilst the stunning Fear Me Now commences like a collaboration between Broadcast and The Radiophonic Workshop before it lifts off into hypno-library-funk wooziness, all creepy theremin, sweeping strings and lascivious bass complementing and dovetailing with each other perfectly.

Despite its hipster-cool affinities, this is a record that eschews any retro-kitsch connotations of easy nostalgia and delivers its own euphoric and elegiac imprint of sounds and shades.