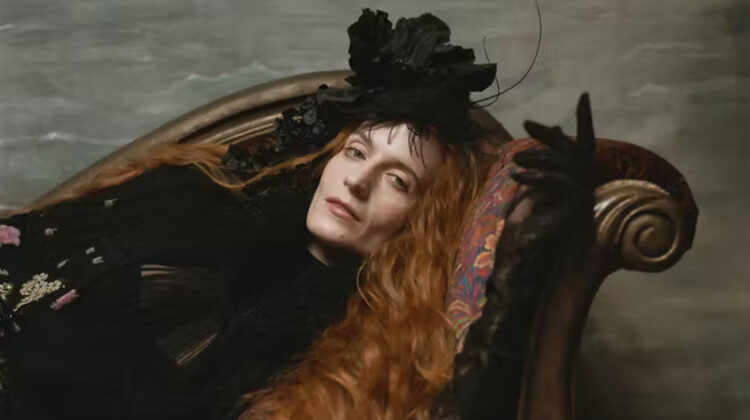 After two years of cancelled tours and nothing but kitchen discos, it’s no wonder Florence and the Machine decided to call their latest record Dance Fever. The queen of Bohemia is back with a powerhouse of surging anthems ready for the group’s stadium shows later this year. This latest record feels very familiar, dipped in relics of otherworldly symbolism; but it’s perhaps the most intimate work yet.

Take lead single, King. Spawned from a real-life argument in the kitchen, this earth-shattering track depicts the dichotomy between Welch’s personal and professional desires. ‘We argue in the kitchen about whether to have children,’ Florence sings, ‘About the world ending and the scale of my ambition.’ At 35, there are crushing social expectations for women to fulfil, and her frustrations can be felt as she bellows along the bridge and chants a series of affirmations as if making a defence of her choices – ‘I am no mother, I am no bride, I am King.’

Free, the final single to be taken from the record, ramps up the tempo, building to what Welch described in an interview with Apple Music as an ‘existential bridge in the middle’, before exploding with very few words in one of her most expressive choruses to date: ‘I am free.’ The feelings of anxiety and insecurity that flood this album are ubiquitous among the human family. Her exclamations of acceptance, of pure euphoria, are so relatable because we all long for that.

Other songs are painfully intimate, such as penultimate track, The Bomb, which narrows in on the frontwoman’s infatuation with self-annihilation (‘I don’t love you, I just love the bomb’); and Girls Against God (‘What a thing to admit / When someone looks at me with real love / I don’t like it very much’).

Eight years into her sobriety, the references to a previous life of alcoholism come in hot and heavy. ‘Sometimes it was easier hungover and half dead’ she croons on lilting, ethereal lullaby Back in Town, and Morning Elvis tells of her ritual drunken escapades on gig nights.

The allusions to the surreal and the mythological are still present, if more subdued than on the likes of 2015’s How Big, How Blue. Choreomania was inspired by the 14th century phenomenon of the same name in which large groups of people became gripped with hysteria and dancing frenzy, going until they dropped from exhaustion. With its plonking electronic tones and sudden whirlwind of instrumentation, Welch and her ensemble capture this concept flawlessly. And Heaven Is Here sounds like the chanting of an ancient Nordic hex with its thundering percussion, high-pitched wailing, and heavy symbolism.

However, the musicality of Dance Fever is incredibly vast and even touches some new territory for the indie behemoths. Produced by Glass Animals’ frontman, Dave Bayley, My Love is a take on a dance club floor filler, full of shimmering synths and heavy beats, Welch’s vocals punctuating it all. Daffodil is led by whirring drum machines and spliced with creaks and groans; even the interludes on the record are intriguing, eerie and full of uncomfortable intakes of breath.

There is an entire spectrum to Florence across the album. From the pensive to the possessed. From frustrated to free. A seething rage underlies tracks like Girls Against God, as Welch expresses the feelings of so many during lockdown; yet gentle melodies such as Morning Elvis convey the redemption and salvation Welch finds in music, performance, and her audience. It’s an album that holds so much raw emotion but feels as if it’s depositing small gems of wisdom.