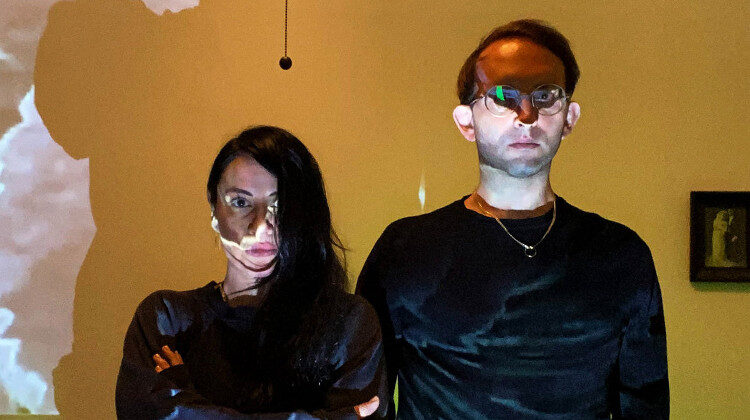 Fine Place consists of Frankie Rose (Vivian Girls, Crystal Stilts, Dum Dum Girls) and Matthew Hord (Running, Pop. 1280, Brandy), who both took time away from their respective bands and solo projects to form the new group. Armed with an array of modular synths, drum machines and distorted electric guitars, the Brooklyn-based duo created This New Heaven as an attempt to “capture the dystopian feel of New York during a period of desertion by the wealth.” Citing inspiration from bands such as The Cure and Cocteau Twins, their sound flirts with electronic pop, shoegaze and gothic post-punk, bathed in their unique style and showcasing Rose’s evocative vocals.

Opening track I Can’t Shake introduces the record’s dark and eerie aura. With no real percussion elements, detuned synths and disjointed echoing vocals come together in an intriguing experimental piece. This is followed by title track This New Heaven, which is a real highlight. It features hazy delayed guitar riffs and piercing synth melodies that hang in the air unresolved, creating an engrossing tension which Rose’s vocals cut through perfectly.

As the record moves onwards you hear more of Hord’s extensive synth collection. They are joined by ethereal vocals and lethargic drums in the atmospheric Cover Blind, whilst Trending To Twenty takes on a more electronic approach with a classic 808 beat. It’s Your House is one of the standout tracks, taking on more of a pop feel with washy pads and arpeggios that underlay harmonic vocal layers. The track builds tension and the impressive vocals again stand out. It’s an interesting change-up from the first four tracks, but doesn’t feel wrong or out of place.

Moving towards the latter part of the album, Impressions of Me offers more swelling synths and big reverb, building more dreamlike vibes without ever really going anywhere. The album concludes with a cover of Adult Fantasies – The Party Is Over, a fitting end that rounds off the record nicely.

There is a lot to like about This New Heaven, Hord’s synth work is impressive and pairs well with Rose’s vocals, which give their sound a more accessible pop feel. Breaking down each track you can tell there has been a lot of work put into its creation, but at times it feels slightly repetitive. Overall, it’s a strong first release from a band that are definitely one to keep an eye on.