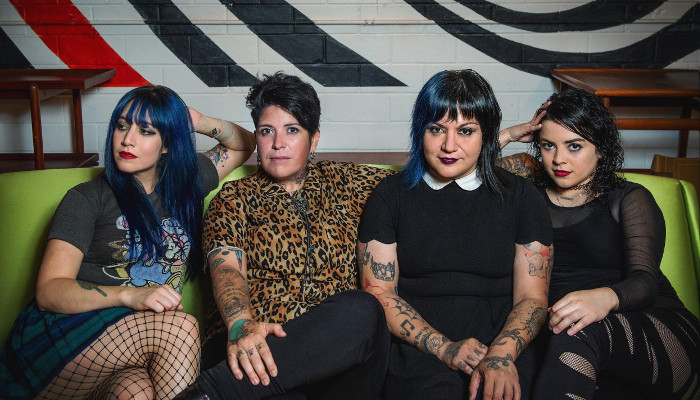 Fea release new record No Novelties amidst energy and commitment to spreading the word on social issues and feminism with punk-laden loveliness.

Joan Jett is a feminist hero and a trailblazing rock and roll icon. She is continuing her legacy with behind the scenes encouragement of new female music talent coming most notably in the form of her record label Blackheart Records. One of the latest releases is from the all-female feminist Latin American band Fea, which manage to cover social issues amongst a punk-laden atmosphere in new album No Novelties.

Fea is made up of Jenn Alva (bass) & Phanie Diaz (drums) who are also members of the rock band Girl in a Coma. Bobby Rivas (guitar) and Letty Martinez (vocals) complete the lineup. This eclectic mix of punk female talent is also produced by LA punk legend Alice Bag. 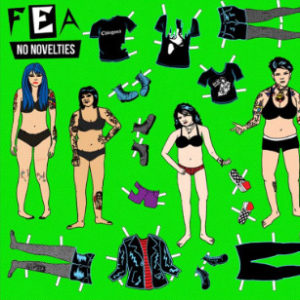 The first track Itch starts with a Blondie vibe and an irresistible kick-ass attitude. This is Fourth-wave feminism but the right kind of feminism that doesn’t bring down men or exclude anyone. At the same time, it celebrates women. I love Fea’s raw live sound captured on this album. This band have an infectious feel to their music that sweeps you along with fun, attitude and, well… balls! Although the band are made up of gay women, Fea has stated they want their music to be accessible and inclusive to everyone. They have achieved this aim and there is no feeling of exclusion when you listen. No Novelties is an album that doesn’t flinch from any female related subject, with Itch a celebration of dirty rock and roll life on the road whilst Red is a song about the menstrual cycle.

There are also songs sung in Spanish. With this album, you get a free feminism lesson with a Spanish lesson combined. No Novelties covers all sorts of subjects as diverse as sexism and the epidemic self-promotion in social media, coupled with a nod and a wink of knowingly poking fun at ourselves as a digital obsessed nation. There is plenty of punk vibration here too and stand out single Let Me Down is a song about how all of us are addicted and obsessed with social media and reality television. That quick fix and ego boost with the utterly shallow love that social media provides; we all know it’s shallow but still we keep going back for more. All of us, as a society, become more and more self-absorbed and in a bizarre endless circle, social media feeds and encourages this behaviour. Lead singer Letty Martinez describes the track as such, citing the world’s obsession with fame, praise and self-promotion.

Overall, No Novelties is an album that covers many subjects in an intelligent, original, and thoughtful way.