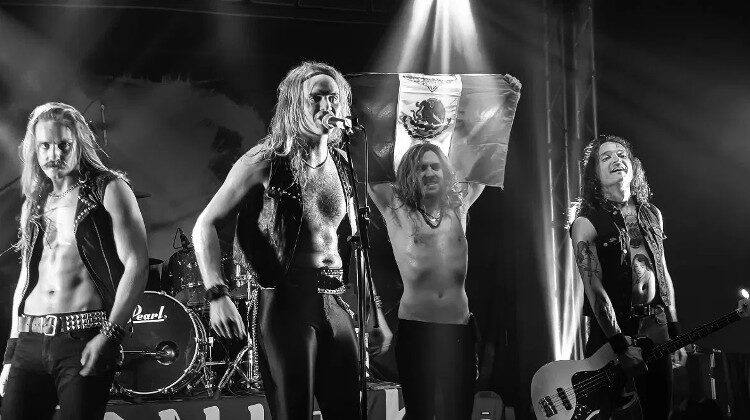 Swedish heavy metallers Enforcer are immortalised through this fantastic recording of their iconic Mexico City show.

Live records in music are nothing new but now, perhaps more than ever due to concerts and festivals being gone for an entire year, does seem like they are needed. Enforcer released their first iteration of Live by Fire all the way back in 2015, with the band releasing Zenith in 2019 to a great critical reception.

Enforcer, if you are unfamiliar, are a bit of a heavy/hair metal revival effort that, despite being formed in the early 2000s, could have easily existed at the peak of the craze in the mid-80s and no one would be any wiser.

What you will find on the band’s newest live release is a faithful recording of their show in Mexico City that took place in August 2019 and features a healthy dose of tracks that span the entirety of the band’s discography, with Zenith predictably getting the most representation.

That does not mean that fan favourites from older albums were omitted though, as the lengthy 18-track list will tell you; Death by Fire, From Beyond, Diamonds and Into the Night also have their time in the sun.

One song that is strangely omitted from the live record is Sail On from their newest release, Zenith, fans of this thrashy throwback are likely to be disheartened by its absence. In my research, I could not find any evidence that proves the band experienced technical difficulties, so it is likely that this was either cut due to poor sound quality, or the band made an executive decision to leave it out.

One thing that I cannot commend Enforcer for enough is their phenomenal stage presence, which comes across gorgeously on the album. Now, unfortunately, I do not believe I have had the pleasure to see these guys live, but the fact that I can feel their energy through a recording is an impressive feat that is normally reserved for the titans of the rock and metal genre.

I am particularly swayed by the live rendition of Death Rides This Night and Undying Evil. If you are a fan of Enforcer, or heavy metal music in general that does not take itself too seriously, such as Steel Panther and Reckless Love, then I am certain you will get a kick out of hearing some old school rock and roll in its gritty, rawest form that’s free of studio cleanliness and clarity. I can almost hear the sound of shoes sticking to the old beer that coats the floor through the tape; a feeling that I never thought I would miss.