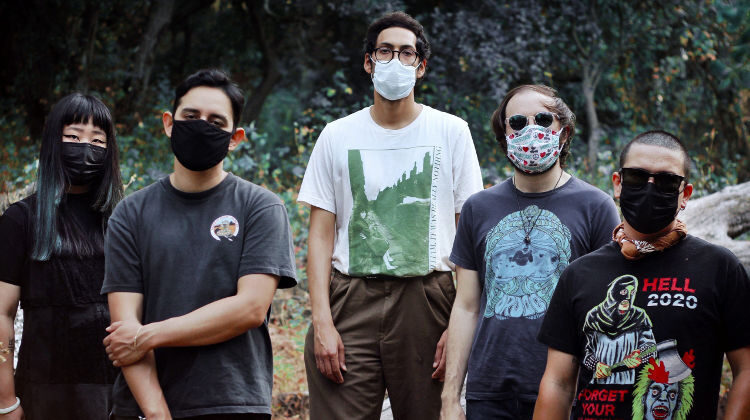 Draag proves that Coronavirus can produce some positives, as without the downtime we wouldn’t be gifted their latest release, Covers EP.

With the inability to tour due to a certain pandemic, LA-based group Draag release an EP of covers (simply named Covers EP). The quintet have thrown their indie-shoegaze talents onto songs by Deerhunter, Throbbing Gristle, Pinback, Milton Nascimento & Lô Borges, and Goon. There’s one trick to releasing a body of work consisting only of covers, which is to make the listener almost forget the original, instead focusing on the brilliance of the writing and the performance. So, have Draag succeeded?

Opening with the Vinyl Williams track Lansing, Draag manipulates the glassy, laid back original into an absolute toe-tapper. The percussion rhythms lean more towards dance, with the maximum use of stereo field reminiscent of prime Stone Roses. It is noisy, in the non-heavy way, sounding best through a good pair of headphones.

The following two tracks, Loro by Pinback and Clube Da Esquina Nº2 are slow and after a while become skippable, but again the group have kept consistency in the EPs tone, with each song sonically cohesive to what was previously heard. It isn’t until the second half of Covers EP where everything picks up, becoming exciting and increasingly gripping to listen to.

Nothing Ever Happened has the intensity and passion that Deerhunter’s original excels in. Where Deerhunter focused on distortion and general pleasant-racket, Draag instead lose themselves in the atmosphere. It could easily be from the summer of love, the Madchester scene, or nineties Seattle. Somehow Draag have managed to amalgamate the feeling all of these important subcultures in modern history gave, all into one track, which when played loud is the definition of mesmerising.

Throbbing Gristle’s Discipline has been given the same treatment, this time directing the song more towards upbeat trance, before developing into a heavier anxiety-inducing enchantment. The following (and final) track, CCLL (by Goon) brings back a calmer normality, but after following on from Discipline’s ending, only intensifies that enchantment due to its high pitched tones that just about balance on the line between enjoyable and unbearable.

Praise has to be given to Draag as they truly have succeeded in the one-trick previously mentioned, where fans of the originals (and newcomers alike) should enjoy Covers EP for what it is. Credit also has to be ditched out, because the entire EP was recorded remotely due to Covid, with members exchanging recordings digitally – particularly impressive as the work sounds unified and meticulously worked out together as a band. Yes, the middle gets a bit mundane, but it is definitely worth a listen.