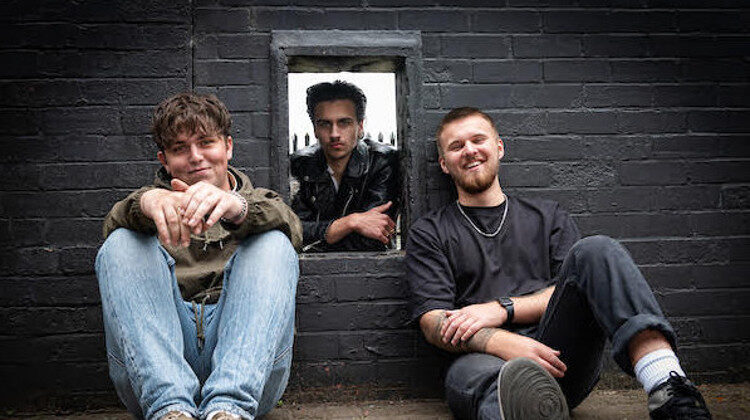 Made up of John Hewitson on lead guitar and vocals, Craig Morrison on bass and Robert Lang on drums, Dogtooth have been playing together since their early teenage years and have become favourites in their hometown of Glasgow. The band have been gathering traction ahead of their debut EP, with several single releases and over 400 live performances to date. The Fear, released via Run On Records, showcases their sound with four high-octane tracks.

The EP starts with All I See Is Grey, which doesn’t waste any time getting into the flow of things. A classic indie-rock tune full of blaring electric guitar and pounding drums, matched nicely by Howtison’s vocals. Powerful lyrics evoke themes of bouncing back after a breakup, but the track isn’t dreary and instead sounds optimistic and full of energy, an enjoyable start to record.

Next up is single The Fear (is out to get us). A track about waking up with a hangover and ‘the fear’ of slowly realising what you have done the night before, a painful experience I’m sure most listeners can relate to. The verses build up tension which is released in a big chorus which makes the track. Despite the lighter-hearted narrative, the vibes are darker than the opener as the track takes on more of a post-punk sound.

Served My Time is up next, a thumping bassline underlying another classic indie tune where Hewitson’s vocals really come into their own. The track features more relatable lyrics, this time about peer pressure and taking the wrong paths in life.

The EP concludes with Don’t Know Why, which was written over four years ago and has been remixed and remastered for this release. The track starts with some pleasing synths that add variety and texture, perhaps something that they might have experimented with a bit more throughout the record. Poignant lyrics tell the story of moving away from your hometown after letting down loved ones, but it’s the brilliant guitar solo that comes out of nowhere that’s the real highlight.

The Fear is a solid EP from a young band with lots of potential. It’s everything an indie record should be; fun, full of energy and technically sound. They are a band that I’m sure would be great to see live and it’s easy to see why they have become popular in their hometown. A strong start and definitely a group to keep an eye on for future releases.