Home » articles » Digging for Gold #3: Putting yourself out there, 70 keepers and John Coltrane Last month in Digging for Gold, we looked at a garage sale find that saw me landing several great records on an early morning stop. This month, the dig was much different as the records found me…

One thing that I’ve learned as a vinyl enthusiast over many years, is that just talking to people often pays off. I’m not referring to talking to other collectors and record store owners, of course, we all do that. What often pays off is casually mentioning that you collect records to anyone. You should mention vinyl records to your non-collecting friends, co-workers, family members, and anyone that you have contact with. There are still people out there with crates in their basements or attics that are “in their way”, and would love to move them out.

I make sure everyone knows that I’m a “record guy” through casual conversation. Once people know you’re a record collector, they usually remember that. A friend of a friend has a garage sale with records, you get a call. Someone has a bunch of records to donate, you get a call. Someone asks me what I did this weekend, I’ll say that I spent some time looking for records…even if I didn’t. That will almost always elicit a response….”People still buy records?”…”I didn’t know they still made those things?”…”Oh, that’s cool”…But sometimes you will get an “I think I still have a bunch of those in the garage” response, and that’s music to my ears.

I had this very situation occur this month, and it landed me several nice records for my collection at no cost to me, other than the time it takes to clean and organize them. (I’m still doing that 3 weeks later, as my wife will attest). A friend approached me with a simple “So, someone told me that you collect records. I have a bunch that I was planning to donate to make room in my house, but you’re welcome to them if you would like.” I quickly thanked him for thinking of me, and we made arrangements to get the records to me. I casually asked what kind of records he had, but didn’t push that much at all. When getting a gift like this, you don’t pick and choose…they want them gone so you take them all and figure it out. I did ask him if he wanted me to donate any of the albums that I didn’t need, or if he wanted them back. He said they were mine to do as I wished, which gives me the OK to donate the undesired LPs. 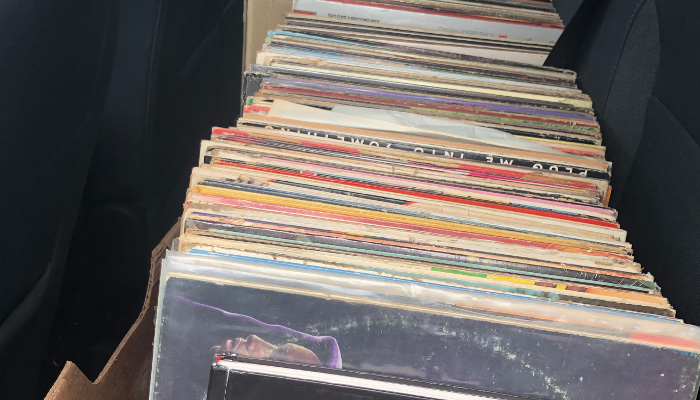 We met up and we unloaded the crates into my vehicle. There were several crates (see picture), and at first glance, I could tell that the genres were all over the map. I could see a few records right away that would certainly become a part of my collection. I was excited to get the records home and begin the dig, so I thanked him again and headed home. There were well over 200 records total, ranging from Classic Rock to Easy Listening to Jazz. There were at least 70 “keepers” in the bunch, artists such as John Coltrane, MC5, Miles Davis, Neil Young, The Doors, UFO, and many, many others. I was also able to donate a large number of records to a charity store.

Great record hauls can pop up when you least expect it if you put in a little effort. Keep talking to people about your vinyl addictions, and you never know when records will unexpectedly fall in your lap! Until next month, good luck in your searches and keep Digging for Gold!