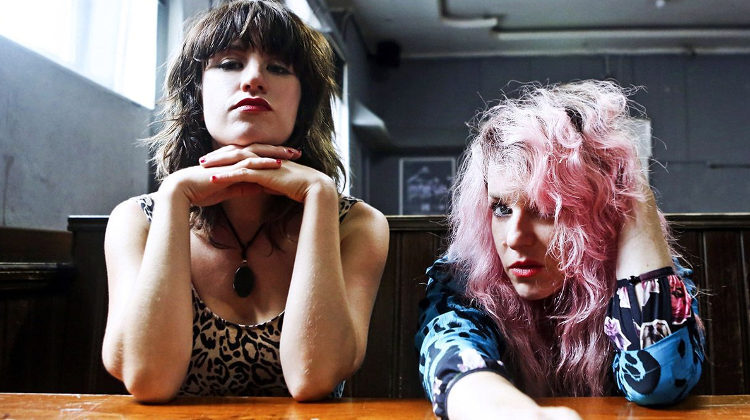 Deap Vally vow to keep experimenting with their sound in their third full-length album, Marriage.

The cover art of Los Angeles-formed rock band Deap Vally’s latest release, Marriage, is a vibrant, eclectic collage: vocalist-guitarist Lindsey Troy has her mint-green-croc-covered feet stretched out over a cut-and-pasted swimming pool, while vocalist-drummer Julie Edwards sits perched on the diving board above in a neon-yellow cheetah-print ensemble. They don’t seem like they’d go together, but in this case, they somehow do—making the design a good representation of the driving force behind their third full-length album.

Deap Vally’s very existence is a contradiction: they’re a rock band who were formed at a crocheting class. Since then, and much like a crocheting hook, they’ve had their ups and downs—which is exactly what defined their approach to Marriage. Talking about their concept for the album, the band said: “Being in a band is like being in a marriage: sometimes it’s magical, sometimes it’s unbearably challenging. To reinvigorate that marriage we’ve made album three a genre-bending experiment with new collaborators and instrumentation that push the limits of what has previously defined us.”

The band’s psychedelic 2020 collaboration with The Flaming Lips, titled Deap Lips, kicked off a kaleidoscopic series of collaborations in 2021–the EPs Digital Dream and American Cockroach saw them collaborate with artists Jennie Vee, Ayse Hassan, Soko, jennylee, KT Tunstall, Peaches and Jamie Hince, all in just eight songs (of which six were collaborative). Still, what hasn’t changed along with their recent approach to music-making is their effortless cool-girl take on rock, which is clearer on Marriage than ever before.

Pre-released single Perfuction hooks the listener into the album with a heavy guitar riff and the slamming of drums, amid rebellious lyrics which disparage perfectionism. Billions relaxes the strong start into a slow drawl, which leads well into the addictive processed sounds of Magic Medicine, which is full to the brim with a welcome kind of noise, especially surrounding the warped guitars. Sexuality is brought to the fore in I Like Crime featuring Jennie Vee, while Phoenix is a classic, self-confident American ode to the power of the self, with the refrain: “‘Cause nothing’s gonna take me down / Nothing’s gonna break my crown / As long as I can breathe / Nothing’s gonna stop me”.

But what goes up must come down—Give Me A Sign follows up on Phoenix with a much slower melody, to match its admissions of insecurity: “I wish I was certain / I wish I was wise”. Nevertheless, Better Run has Deap Vally back up and running again with its confident spoken-word lyrics and a meandering chorus that never seems to stay in one key. This confidence reaches its peak with the next two tracks, I’m The Master, and High Horse featuring KT Tunstall and Peaches: “‘Cause I’m high on my horse / And I’m not coming down soon”, they sing, backed up by steady drums and Peaches’ rhythmic rap section, with lyrics so strange you somehow struggle to tear your ears away from them. At track twelve, Look Away featuring jennylee is the second and last downbeat track of the album, a charming ensemble of drums and plucked-out guitar harmonies, with contrasting lyrics that stay true to the album’s theme: “This is heart / this is heart / this is heartache” is followed by “In your arms it’s a holiday”.

Though the album claims to be a ‘genre-bending experiment’, Marriage stays largely within the comfort zone of both the band’s previous discography, and the rock genre. Nevertheless, the result is promising: a cohesive album that sticks to their roots, and like the cover art, has them dangling their feet over the collaborative waters, testing them first before they dive fully in.

“Where do we go / Where do we go from here?” the band sings on Where Do We Go. Their guess is as good as ours, but based on this album, Deap Vally are at least bound to be somewhere interesting. Maybe the next album cover—and their next album—will show they’ve made it to the deep end of that pool.